Schedule a time to tee off at some of the Atlanta area’s top golf courses. 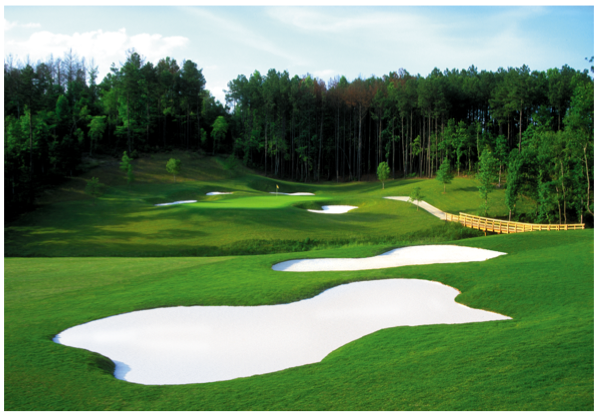 For golfers visiting Atlanta during the lovely, sunny days of summer, there’s no need to miss a day out on the links.The area is home to numerous golf courses that serve up challenging play on interesting courses. Whether it’s a world-class course or golf in a picturesque neighborhood park that strikes your interest, get ready to tee up around town.

Bear’s Best Atlanta is among the most unique golf courses in the country, and is situated 40 miles outside of Atlanta, in Suwanee, Ga. The course is made up of 18 holes—but not just any 18 holes. These 18 specific holes were personally selected by Jack Nicklaus from more than 200 course designs worldwide. These favorites of his were then re-created at Bear’s Best, resulting in an out-of-this-world playing experience. Holes from Castle Pines, Muirfield Village, PGA National, Sherwood Country Club, Shoal Creek and Gleneagles are featured. 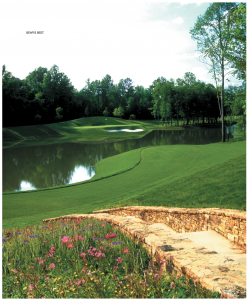 The concept of Bear’s Best is so unique, Turner explains, that it’s only available in one other spot in the country—at its sister course, Bear’s Best Las Vegas.

For many, she continues, playing Bear’s Best is a lifelong dream. “To see these holes that you’ve seen on TV and be able to play them all in one place is amazing.”

Turner classifies the course as challenging, but notes that they have a variety of tee boxes that will suit any skill level.

The course is open seven days a week and offers a host of amenities. More than 60 sets of rental clubs are available to the out-of-town golfer, and a fully stocked pro shop offers any necessities that may have been forgotten. Bear’s Best Atlanta also offers a full practice driving range and three different practice ranges, all turf. In addition, Bear’s Best Atlanta is home to Jack’s Place, a sports memorabilia-themed bar and grill.

“It’s one of the most well-maintained courses in all of Atlanta,” Turner says of the course. “It’s 18 signature holes from all over the world and it’s one of only two opportunities in the world to play a course like this.” (5342 Aldeburgh Dr., Suwanee; 678-390- 4704; bearsbestatlanta.com) 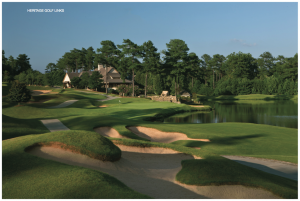 Heritage Golf Links is a 27-hole facility built in 1996 as a private course. It’s now open to the public for daily play and is the course that most guests of The St. Regis Atlanta end up visiting, says resort concierge Louis Wood.

The course, located 15 miles outside of Atlanta in Tucker, Ga., offers four configurations of 18- hole play.

“This is a hidden gem sitting on 122 acres,” says Burdette Hawkins, sales and marketing director for Heritage Golf Links.

The course has had a few brushes with fame, including being featured on the Golf Channel’s “The Haney Project” with Charles Barkley. Heritage Golf Links has also hosted playing lessons with professional golfers and been featured on reality TV shows. The course often welcomes Atlanta celebrities, though Burdette declines to name names.

In addition to its 27 holes and picturesque scenery, the course also offers a full grass driving range and practice center. The practice center features an expansive grass tee, practice sand bunker and putting green, all under a highly sophisticated lighting setup designed to illuminate shots up to 300 yards. Rental clubs are available through the pro shop, and the course also boasts a full restaurant and bar, the HGL Grill.

Heritage Golf Links is the perfect spot for guests visiting The St. Regis Atlanta, Hawkins says, because of the challenging play and easy location.

“I would say every round is different because you never know what kind of lie you’re going to get on these undulating fairways,” Hawkins explains. (4445 Britt Rd., Tucker; 770-493-4653; heritagegolflinks.com)

The North Fulton Golf Course is located just three miles from The St. Regis Atlanta, in picturesque Chastain Park. Often referred to as simply “Chastain” by locals, the course is an 18-hole facility designed by legendary course designer Chandler Egan, who also designed the famed Pebble Beach course, in conjunction with Walter Hagan and Bobby Jones.

“North Fulton is really enjoyed by the people of Atlanta,” says general manager King Simmons. “It’s got a skyline view of Buckhead and is a great and challenging place to play.

“It’s for the avid golfer that knows his way around the golf course,” Simmons continues, “but it also has wide open spaces so it’s a good option for newer golfers as well. There’s a good variety of play.”

“The chipping and putting on the course is the most challenging aspect,” Simmons explains.

There’s also a significant amount of history attached to this course, originally designed in 1937. It was formerly the home of the pre-Masters PGA Tournament and also the former site of the National Public Links Tournament.

For companions who don’t enjoy golf, North Fulton offers a unique option: A 3.5-mile track surrounds the course, perfect for jogging, power-walking and enjoying the lush greenery of Chastain Park and the course itself.

The course has hosted its share of well-known players, Simmons adds, including Harry Connick, Jr. and Willie Nelson.

“The great thing is that with Atlanta, you never know who you’ll see,” Simmons says. “Once they get on the course, though, you’d never know they’re here.”

Overall, he says the course is a good match for just about any golfer. “It’s challenging, but not so overbearing that new golfers can’t have fun.” (216 W. Wieuca Rd. NW, Fulton; 404-255-0723; northfulton.americangolf.com)

The Bobby Jones Golf Course, closest to The St. Regis Atlanta at just 2.5 miles away, is an 18- hole course recently renovated with Champion Bermuda greens. Designed by John Van Kleek in 1932, the course is actually situated on the site of a Civil War battle, the Battle of Peachtree Creek. Peachtree Battle Creek still winds throughout the course, impacting play on five holes.

Named after the man many consider the most important golfer of the 20th century, Robert Tyre “Bobby” Jones Jr., the course contains quite a bit of Bobby Jones memorabilia. Jones, who won 13 major tournaments in the 1920s, drew national and international attention to the game of golf.

“It’s just fun because you’ve got the historical aspect of Bobby Jones there,” explains Simmons, who also manages the Bobby Jones Course. “It gives you insight into how golf was played in the early 1940s, especially number 11, which intertwines around trees. The name Bobby Jones brings a lot of attention to it.”

“It is a very, very exciting golf course,” Simmons continues. “It’s right in the middle of Midtown and played by thousands of people who come into the city. It’s fun and inviting.”

“Bobby Jones is so convenient and easy to get to,” Simmons says. “It’s a little flatter [than the North Fulton Golf Course] and easier to get around, plus a little shorter, but it’s still a challenging short game.” (384 Woodward Way; 404-355-1009; bobbyjones.americangolf.com)

The concierge staff at The St. Regis Atlanta is an excellent source of knowledge for guests looking to hit the links in an unfamiliar city.

“I’ve had guests in the past that are very avid golfers, and they’ve played them all,” Wood explains. “If they had the time, they’d want to visit Bear’s Best. The course and the amenities are very nice. But, it can be difficult with traffic. If they didn’t have much time, they’d visit a closer course, most often Heritage, though sometimes Bobby Jones if they were really pressed for time.”

With such a variety of courses to choose from, one thing is certain: Golfers have plenty of access to the links at their fingertips in Atlanta.