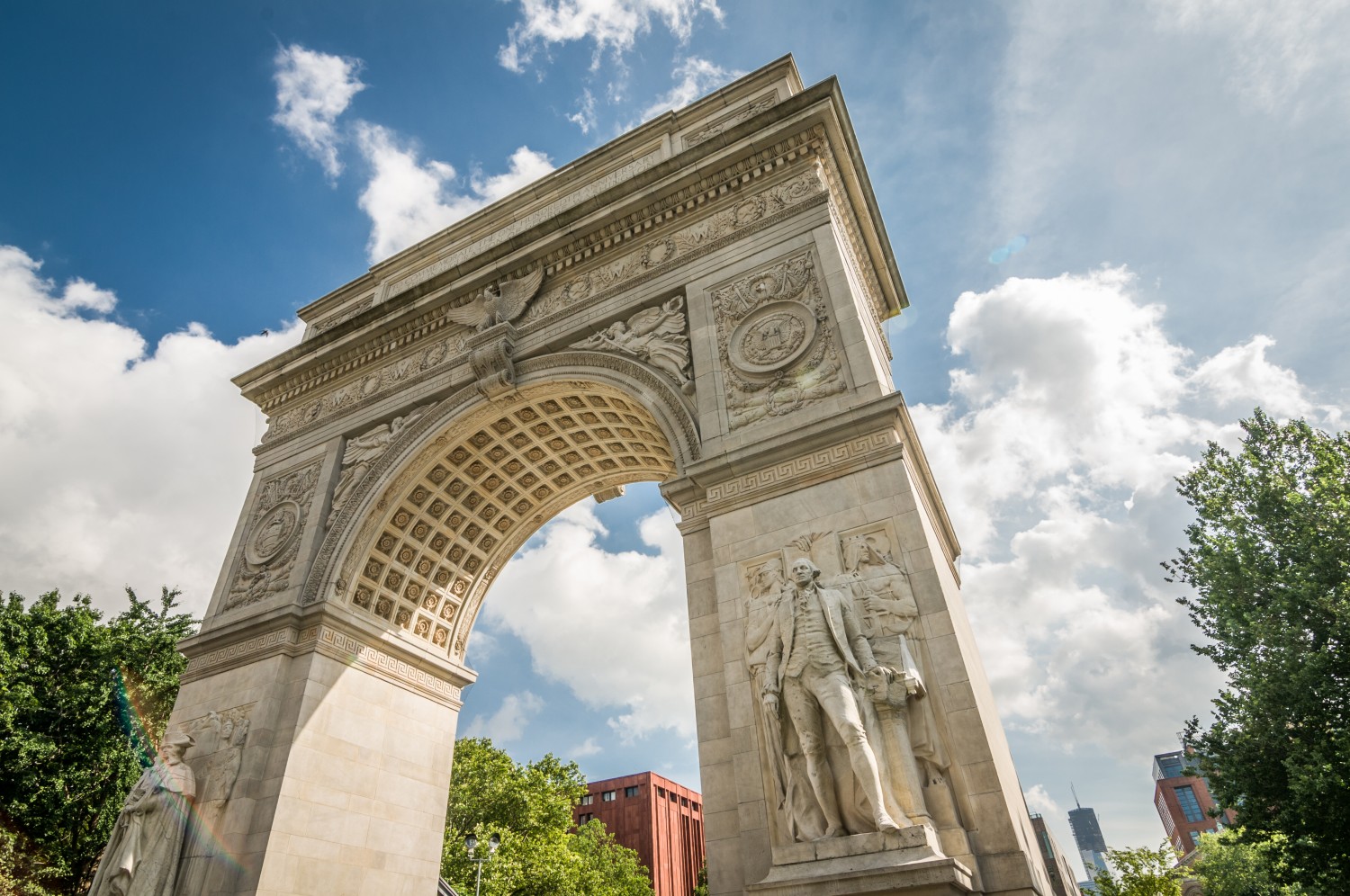 Towering over Greenwich Village in New York City, the Washington Square Arch shines in the sun. Further north, the two mighty marble lions—aptly named Patience and Fortitude—perched in front of the New York Public Library gaze with silent stoicism as though they were gigantic guardians of the Big Apple.

Travelers from around the world easily recognize and cherish these New York landmarks and many others like them in major global cities. However, very few people realize these works of art have something in common: They were carved by the Piccirilli brothers, whose techniques proved to be a revolutionary boon to the American artistic landscape during the early 20th century. The family’s artistry arguably made New York a culturally richer place, explains Thayer Tolles, the Marica F. Vilcek curator of American paintings and sculpture at the Metropolitan Museum of Art.

“It’s hard to imagine New York without public sculpture,” Tolles explains. “The late 19th and early 20th centuries [were] what we call the ‘city beautiful era,’ where there was tremendous amount of attention being paid to embellishing buildings with architectural and sculptural detail.”

But she also points out that while the public easily recognizes the sculptures throughout the city, they often don’t know the identities of the creators. The Piccirilli brothers had all but faded into obscurity when they died in the late 1940s and early 1950s—that is, until a math teacher living in the Bronx rediscovered the family’s work in the early 2000s.

While taking sculpting courses at the Art Students League in Manhattan, New York native Bill Carroll learned that the property at 467 E. 142nd St. in the Mott Haven neighborhood of the Bronx—just a few blocks from where he grew up—was the residence and studio of the Piccirilli family. Carroll’s interest was piqued when he discovered they were known for carving the Lincoln Memorial statue in Washington, D.C., and it launched him and his wife, Mary Shelley, on a journey to learn about the family of master carvers.

The Carrolls dove into researching the Piccirilli brothers—Ferruccio, Attilio, Furio, Masaniello, Orazio and Getulio—which was a difficult task since the names of hired carvers were never listed on works designed by other sculptors or architects. But, through sheer persistence, they ascertained that these prolific sculptors were responsible for carving many of New York’s most prestigious monuments.

Included in that list is architect Stanford White’s Washington Square Arch, an intricate work that features two statues of America’s first president to illustrate both facets of his mercurial personality: one as a wise diplomat seeking peace and the other a dedicated commander-in-chief protecting his country. The Piccirillis also brought to life architect George Post’s 110-foot-wide pediment of the New York Stock Exchange in Manhattan, which includes 11 figures, the most prominent being a statue of a robed woman named Integrity.

As time passed, the Carrolls unearthed more about the family history through visits to the Metropolitan Museum of Art and the Bronx County Historical Society, uncovering a typical success story of immigrants moving to a new world full of promise. And, in the years since stumbling upon the talented brothers in the records of New York’s art and architectural history, the crusading couple has made it their personal mission to share that story with the millions who enjoy the Piccirillis’ work across the nation.

Back to the Beginning

Born in 1844, family patriarch Giuseppe Piccirilli raised his family—which included a wife, daughter and six sons—in the Province of Massa and Carrara (home of the elegant Carrara marble) in Tuscany, Italy. The father and six sons were all trained carvers and sculptors; Attilio and Furio, who were the most prominent in terms of their careers as independent sculptors, were both trained at the Accademia di San Luca in Rome.

When the entire family moved to New York City in 1888, and eventually to their Bronx residence—which would soon serve as their studio—the Piccirillis brought more than their unique skills and talents. According to Carroll, there were no American marble quarries for sculpting during the mid-19th century that matched the high quality of marble in Italy.

“If American sculptors were working on a figure that was going to be in marble, they would have to send their [plaster] model to Italy to be carved,” he explains. “But when the brothers arrived in the South Bronx, there was a lot of business available for them.”

Tolles also shares that the Piccirillis practiced what she calls a traditional studio workshop system. In this particular process, the sculptors and architects—whether from within the family or those who commissioned them—would provide their works in clay to be transformed into a plaster cast, which was then handed over to the Piccirillis to be carved into marble.

“It was very much of a collaborative process, and the artist would then be freed up to pursue other commissions,” Tolles says. “Between the six of them, they were remarkably prolific. … It was something that was just incredibly beneficial for the professionalization of American sculpture in this country.”

When Giuseppe died in 1910, Attilio took over the family business, which continued to grow and develop a reputation within the industry. Architects and sculptors like Daniel Chester French (who designed the statue for the Lincoln Memorial) and Paul Wayland Bartlett regularly hired their services to create their pieces. But it is the brothers’ kindness and humility that drew frequent guests to their studio for dinner gatherings and other occasions, including Mayor Fiorello LaGuardia, President Theodore Roosevelt, John D. Rockefeller and Italian opera tenor Enrico Caruso, who would sing while the brothers worked.

What the Piccirillis had in modesty was equaled by their artistic magic as they created their own original sculptures. In 1913, Attilio sculpted the USS Maine monument, located at the southwest entrance to Central Park, in memory of the sinking of the battleship Maine. Another of his original designs is the Firemen’s Memorial at Riverside Drive and West 100th Street, made in 1913 in honor of firefighters who gave their lives in the line of duty.

Furio also became known for his original pieces, particularly his most critically acclaimed work: Seal. The polished marble sculpture shows a seal balancing on the side of a rock, its head held high almost with a sense of pride. This signature piece of art not only captured the 1929 Speyer prize from the National Academy of Design—his brother Orazio won the previous year with his sculpture, Black Eagle, which was purchased by the Legion of Honor museum in San Francisco—but it was also accepted to be on display at The Metropolitan Museum of Art.

Masterpieces at the Met

Today, devotees of the Piccirillis can personally see samples of their work around the city and at Manhattan’s Metropolitan Museum of Art—original sculptures such as Furio’s Seal and a bust by Attilio titled Study of a Head are featured in the American Wing. Three carvings that were designed by other sculptors but carved by the Piccirillis are also on display: Augustus Saint-Gaudens’ The Children of Prescott Hall Butler, as well as French’s Memory, which captures the vanity of a woman gazing in a mirror, and The Angel of Death and the Sculptor from the Milmore Memorial, where death—in the form of a beautiful woman—gently takes the sculptor’s hand.

But the collection’s centerpiece is Attilio’s Fragilina, a marble, 48.5-inch nude woman whose beauty is captured in abstract simplicity. Jerry Capa, a student and friend of Attilio’s during the 1940s, believes that Fragilina (“the little delicate one”) is the sculptor’s best work.

“Fragilina is incredible; you can stay there and look at her all day,” he says. “And it seems as though if you put your fingers on her, it will give [in] because it looks like flesh. It’s a strange sensation when you look at it.”

The studio shut down in the mid-1940s as the brothers passed away one by one; some years after the youngest Piccirilli died in 1956, the studio was eventually torn down. The family’s collective popularity faded away until the turn of the century, when dedicated fans such as the Carrolls and Capa helped bring their lives and work back into the spotlight. After gaining much publicity in the Daily News and The New York Times, their achievements were acknowledged on a plaque installed at Brook Park in the Bronx in 2001—proving that as long as the colossal works still stand, the legacy of the Piccirilli brothers will be remembered for generations to come.