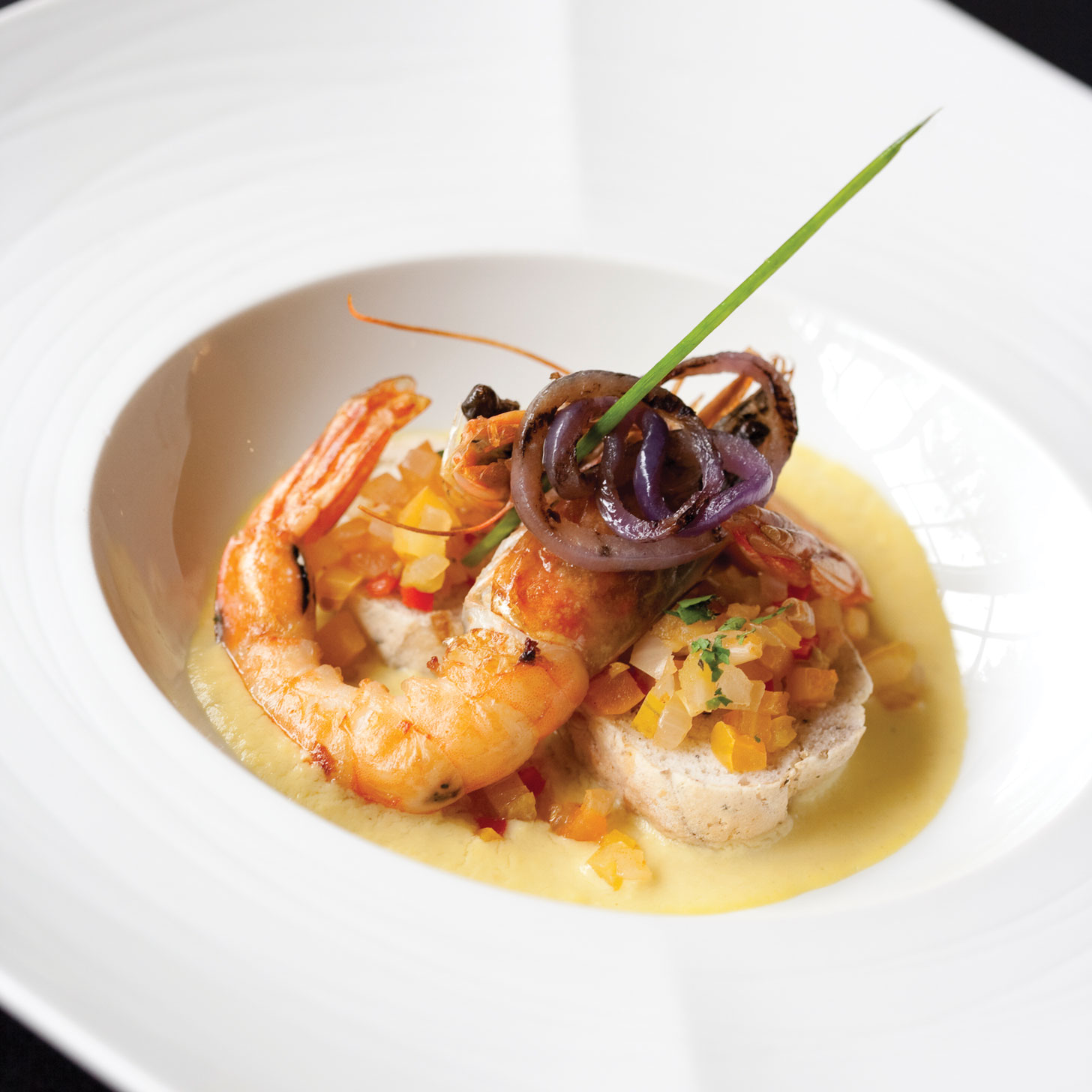 The King of Cuisine

Executive Chef John Signorelli brings a wealth of unmatched experience and international flair to his cutting-edge, top-quality dishes at The Remington Restaurant.- By Gaye Weintraub 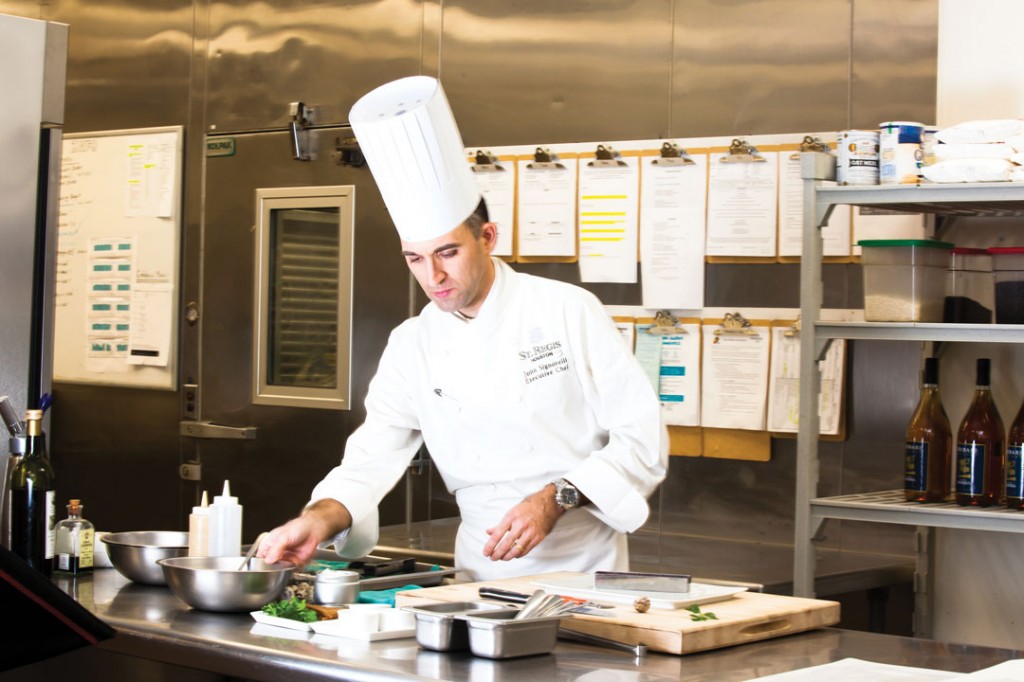 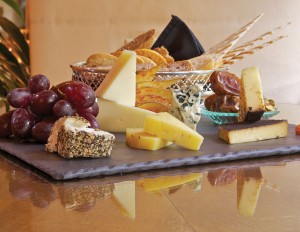 As the fourth largest city in the United States, Houston offers more than 2,000 full-service restaurants. Consistently listed among the top 10 cities for eating out in the U.S., food encompasses more than just a source of nourishment for Houstonians and the city’s visitors—delectable culinary experiences serve as the center of daily life.

Considered one of the city’s finest places to dine, The St. Regis Houston’s AAA/CAA Four Diamond-awarded Remington Restaurant provides just that. Under the direction of Executive Chef John Signorelli, the restaurant presents impeccable fare, incredible pairings and discernible flavors unparalleled by any other establishment.

Signorelli’s creation of signature dishes exclusive to The Remington Restaurant originates from his worldly experiences. Born and raised near Colorado Springs, Colo., Signorelli began working in the restaurant industry at 13 years old. Inspired by his mother’s culinary talents, Signorelli dreamed of becoming a professional chef and started at the very bottom as a dishwasher at a restaurant where his sister worked as a prep cook. When she left, Signorelli assumed his sister’s vacated position.

At 17, he spent a year as an exchange student in Japan, which impacted Signorelli greatly and would influence his artistic talents in future years. Upon his return to the United States, Signorelli accepted a position at a five-star, five-diamond hotel in Scottsdale, Ariz. Surrounded by graduates of the Culinary Institute of America (CIA), Signorelli obtained the structure he needed. At 20, Signorelli knew he also needed a more formal education if he were to prosper in the field, so he enrolled in the institute and applied his restaurant experience to the dictations of the professors.

“I took the best of both worlds and focused on the fundamentals of cooking,” Signorelli says.  “After CIA, things just blossomed, and a whole new world opened for me.” 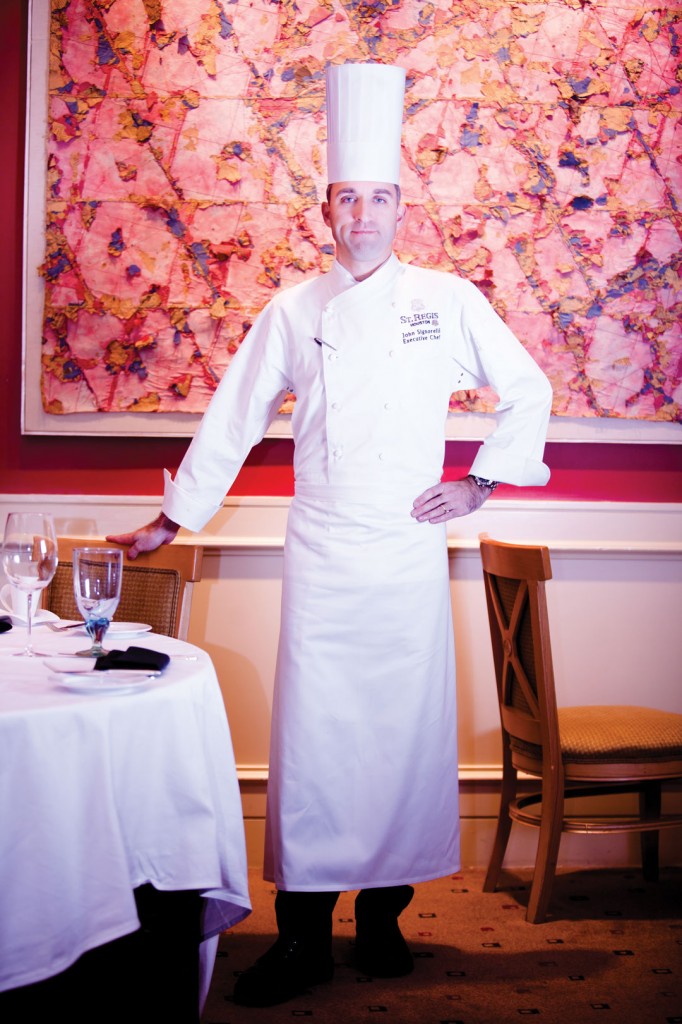 While at the Culinary Institute of America, Signorelli’s involvement in student organizations, such as the ice carving club and epicures of wine, not only earned him recognition but also caught the attention of Walter Scheib, executive chef at The Greenbrier in Sulphur Springs, W. Va., who later became the White House executive chef for the Clintons.

Signorelli accepted Scheib’s invitation to join the five-star, five-diamond resort, where he remained for one year. On par with excellence, The Greenbrier consummated Signorelli’s talents, and before long he heard about an opportunity to assist in the opening of The Ritz-Carlton in Osaka, Japan.

“The opportunity interested me because it allowed me to tie my career back to Japan and continue my path with five-star, five-diamond hotels,” Signorelli says. “I decided to keep as a standard, if you will, of the level I want to be at in my career.”

“The experience was phenomenal,” Signorelli says. “We crushed the competition and gained significant media exposure. The level we were at was unmatched in Japan.”

“A well-respected French master chef, Salomon taught me so much,” Signorelli says. “He took me under his wing, and I owe a great deal of my career to him. I am very proud of what we accomplished.”

Ready for the next endeavor, Signorelli sought new opportunities and arrived at The St. Regis Houston.

“Working for The St. Regis Houston goes back to my stand to maintain a certain level in the culinary arts. Houston is a fantastic city and an enticing food town. It’s very inspiring for me to be here,” Signorelli says. 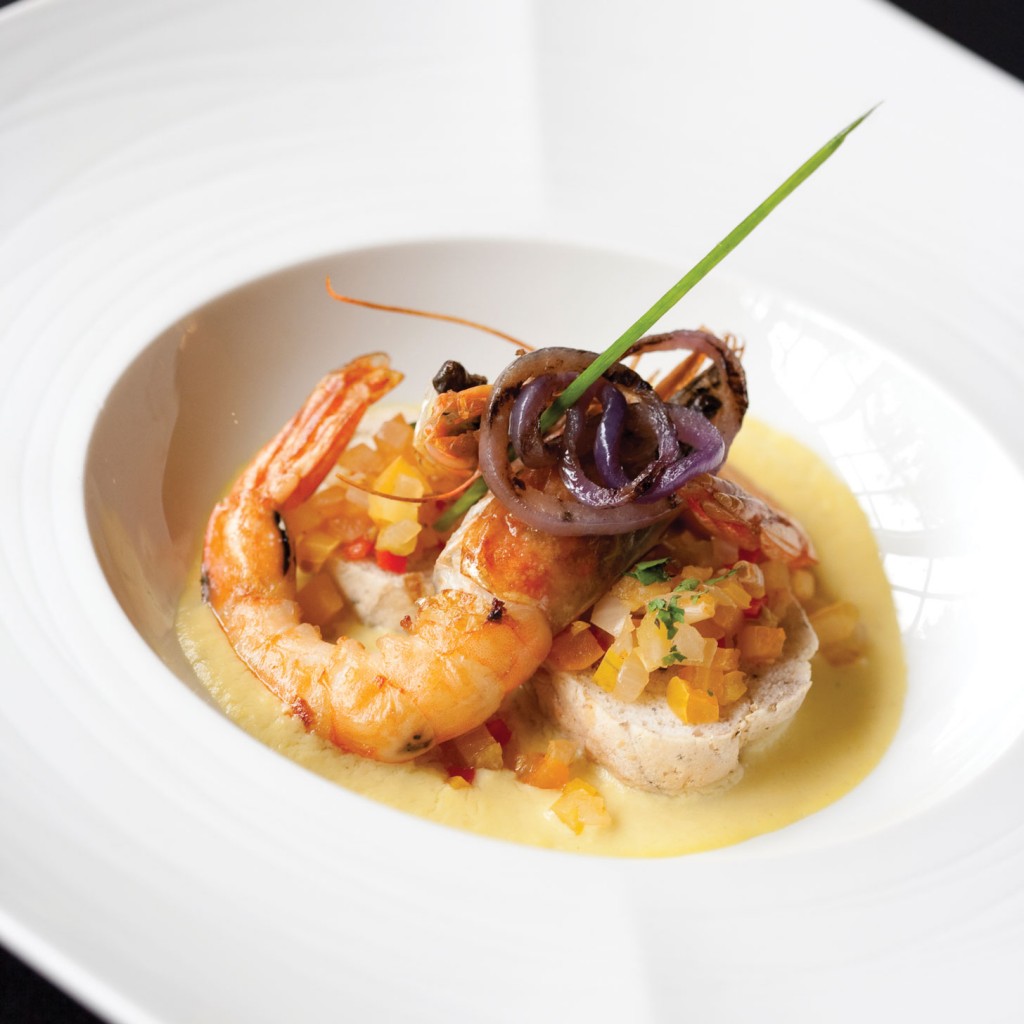 The evolving menu of The Remington Restaurant presents cuisine rarely attempted by other chefs. With a concentration on regional modern cuisine, Signorelli showcases the finest of ingredients indigenous to the Pacific Northwest, Southwest, Central, Northeast and Southeast.

“All menu items focus on one of five regions,” Signorelli says. “There is a story behind each dish and the ingredients. We take the freshest ingredients in season and augment tradition by incorporating different flavors and flairs.”

Signorelli introduces a new menu each season that captivates locals and international visitors. In addition to Signorelli’s strong French and Japanese backgrounds, he harnesses European style as well.

“I’m very lucky that my major hobby is travel,” Signorelli says. “France, Belgium, Italy—the cuisine over there is just phenomenal.”

“The United States has a very broad range of cuisines,” Signorelli says. “It’s a mixture of those tangents that has proved very successful for us. Guests really appreciate the fact that we’ve not only sourced ingredients but intelligently thought about how each one goes together.” 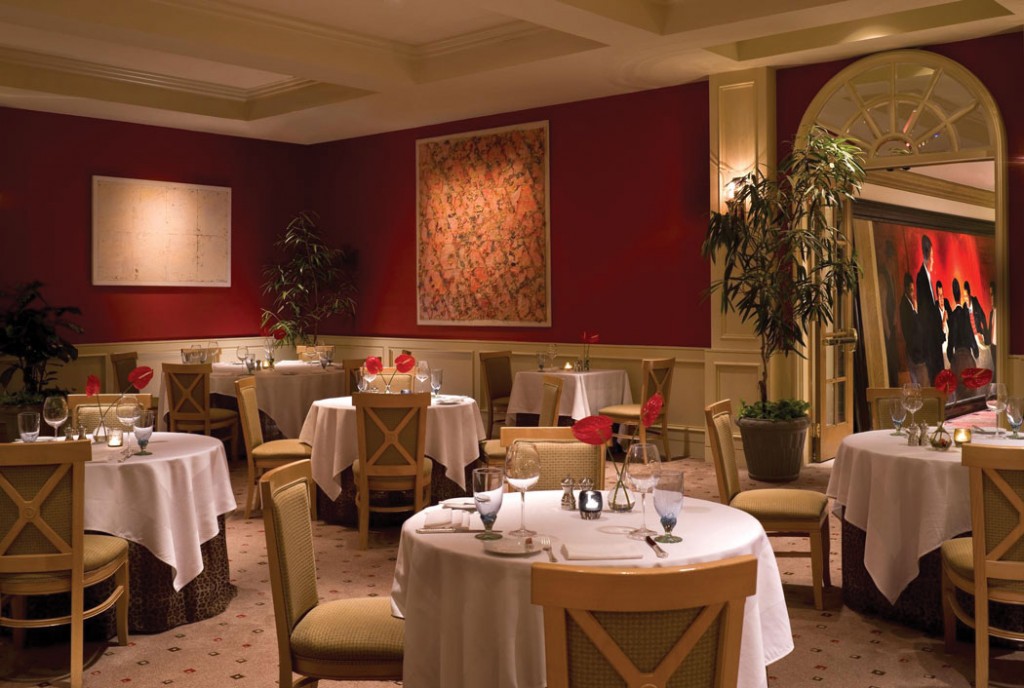 Whether Signorelli deconstructs clam chowder or black bass, all key ingredients indigenous to the region he wishes to showcase get reworked into the dish, sparking the interest of guests.

“The St. Regis Houston attracts not only locals but repeat clientele as well. For guests to see something new like that is very interesting for them, too,” Signorelli says.

Part of the appeal of The Remington concerns Signorelli’s dedication to local farms and sustainable cuisine, which he says has played a large role in the restaurant’s success.

“The focus of The Remington has been very successful because we remain focused on sustainability,” Signorelli says. We avoid depleting resources and those that are unhealthy or inhumane.

“We want to be trendsetters, but I’m not fond of trends. We want to be very advanced; for our team to be actively involved in planning the menu, testing new offerings, and asking guests for their feedback,” he adds.

Signorelli takes pride in The Remington’s menu and seeks inspiration from his staff.

“The cooks in the kitchen are responsible for menu creation, too. I charge them with the freedom to use their own creativity, for as a chef, it is my responsibility to allow them to grow, to put their best foot forward, and to flourish,” Signorelli says.

The menu at The Remington changes relatively frequently. Signorelli introduces new dishes quarterly, some more often as the seasons change. Because Houston enjoys a short spring but prolonged summer, the spring/summer menu remains in effect longer than others.

“The menu change is quite significant,” Signorelli says. “The fun for us is the fluidity and responsiveness to make sure we’re taking advantage of the season.”

New menu items include consistently providing the ultimate quality incomparable to any other restaurant in the city.

“Quality is of utmost importance to me,” Signorelli says. “Without quality, the guests aren’t going to come. Our commitment to excellence puts us above the competition and sets us apart. We do not compromise at The St. Regis Houston.” 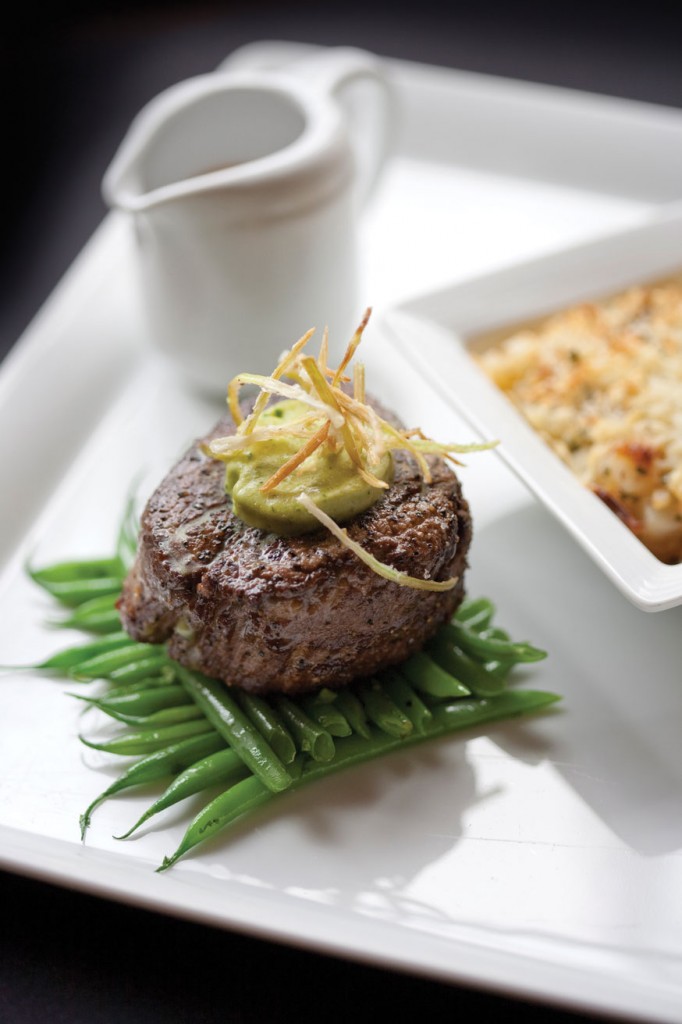 Signorelli thrives on creating memorable guest experiences. “Nothing makes me feel better than to hear a guest say, ‘It was the best I’ve ever had!’ ”

He, however, also finds it important not to lose focus as a chef. “The reason I am in this business is to make guests smile,” Signorelli says. “From the valet to the reception desk to security to housekeeping—our guests’ outstanding experiences are above and beyond what they can get anywhere else.”

Although Signorelli faces many challenges as opposed to restaurants in other cities, he meets each challenge with absolute gusto.

“Houston is not an easy place to obtain the products I need, as they correspond to the regionality of my menu. I’ve taken great strides to build great relationships with my purveyors to get what I need when I need it,” Signorelli says. “On the other hand, I have a broader variety to choose from than if I was locked into one coast or another.”

For the best of fall, Signorelli suggests his three favorite menu items: the halibut, the Texas prime ribeye and the pork chop.

“I love seafood,” Signorelli says. “And the halibut is phenomenal. Texas beef is also great with its outstanding flavors and marbleized texture. The all-natural black breed of pork that we serve is an amazing 14-ounce, bone-in chop, which is as tender as a prime ribeye.”

The Remington seats a total of 124 guests, with 86 in the restaurant, 30 in the adjoining Red Room and eight in the Wine Room. Exuding contemporary elegance, the restaurant includes modern artwork and a conservatory for guests to relax in the sun. In addition to breakfast and lunch, the restaurant serves dinner Monday through Saturday. Guests on business appreciate the executive lunch, served bento style, with three courses on small plates.

Part of providing a bespoke experience to each guest includes anticipating needs and providing the best possible quality. Currently, Signorelli employs a staff of 31, which includes 20 culinary crew members in addition to a banquet chef, pastry chef, two sous chefs and seven stewards.

“When a guest leaves, I want the experience to be a cherished one. I want that guest to come back to The Remington Restaurant again and again,” Signorelli says.

Signorelli believes it is important that guests know their value to The St. Regis Houston and The Remington. “I want guests to know we generally care for them,” Signorelli says. “We want to create a memorable experience that’s above and beyond anything they’ve ever known. As a chef, that boils down to what’s on the plate or what’s in the wine glass.”

The primary difference, he says, between working in a hotel versus a restaurant remains the overall experience of the guest and not just the meal. For that reason, the entire staff at The St. Regis Houston employs internal tools and tricks to find out information, such as specific needs or upcoming celebrations, and record preferences to bring about the magic that the hotel prides itself.

The magic of The Remington evolves from a delicate balance of four things: Signorelli’s creativity based on his experience, the expectations of the clientele, the availability of sustainable ingredients and what inspires his culinary team.

The creativity Signorelli possesses contributes to the overall guest experience. In addition to the 40 or so types of dishes employed by The Remington, Signorelli incorporates the oddest of culinary tools into his repertoire.

“I love going into a hardware store to look at tools and see how I can use them in the kitchen,” Signorelli says. “The texture on something like the cover for a fluorescent kitchen light becomes perfect for tempering chocolate. A hook from a hanging lantern becomes the display for shrimp tempura.”

It’s safe to say that Signorelli has a true knack for knowing how to entertain. His talents for seamlessly delivering gourmet masterpieces and culinary experiences to guests from all backgrounds and places are what bring about the “magic” of The Remington Restaurant.

“I’ve loved music since I was 9,” Signorelli says. “Classical, jazz—it all flows into the right notes, the right tones. This associates with the menu and our accommodation of our guests. If we were inflexible, we wouldn’t be here. We’re ultra accommodating and will find a way to exceed every expectation.”