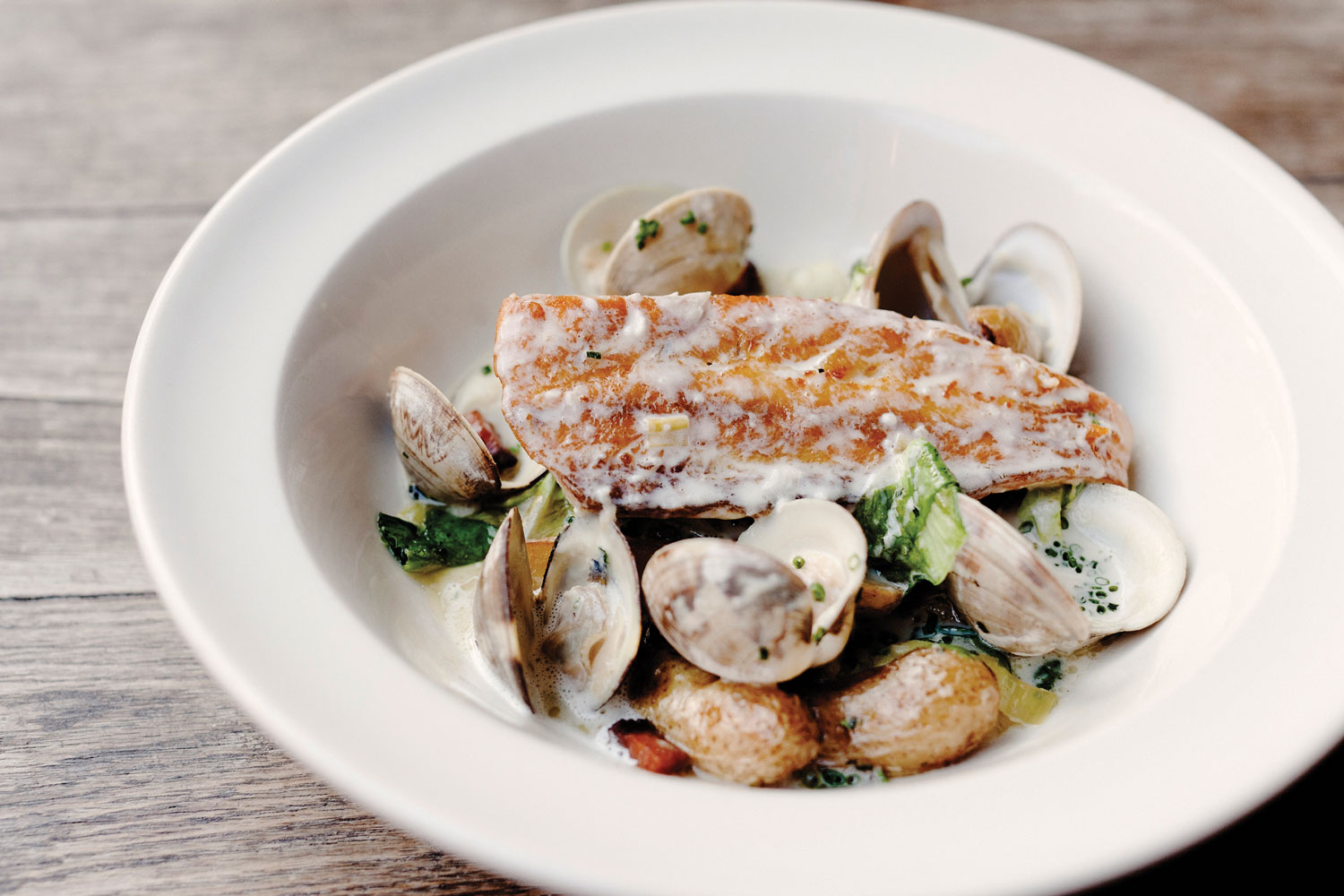 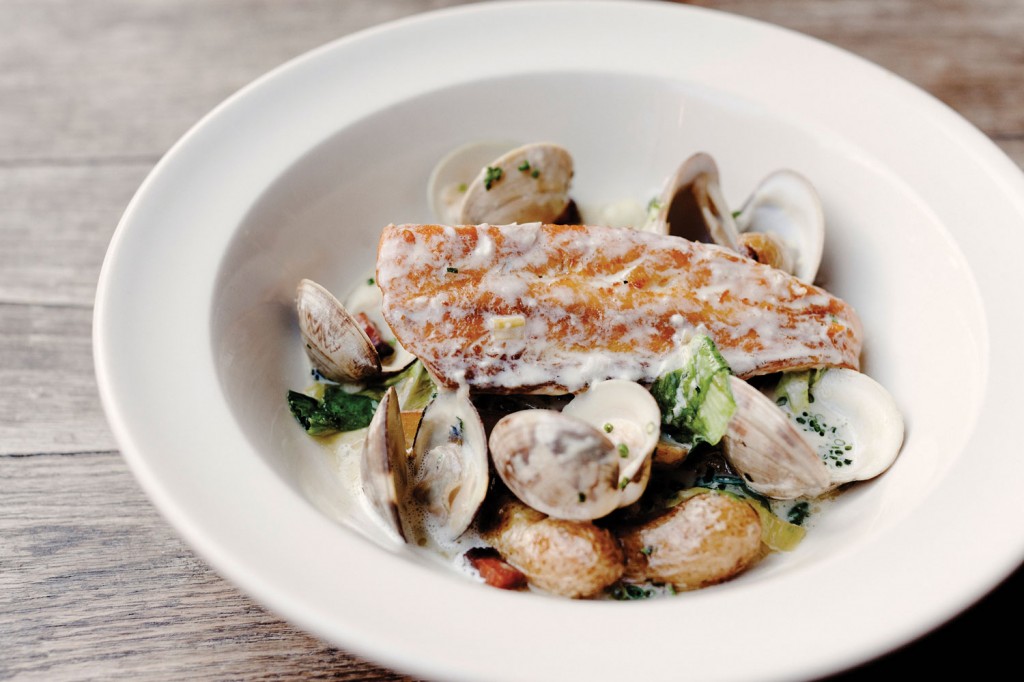 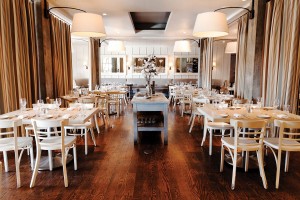 In the eyes of many gourmet connoisseurs, traditional Southern food has never been held in the same high regard as, say, classic French cuisine.For much of the 20th century, the haute cuisine (which literally translates as “high foods”) style popularized by Georges Auguste Escoffier was massively influential, and the nouvelle cuisine that eventually emerged in rebellion against Escoffier’s ideals emphasized creativity and presentation. Meanwhile, simple, soulful Southern food was largely derided as “comfort food”—what people cooked at their homes on a Sunday afternoon rather than what they wanted to eat when they went out to nice restaurants.To quote Georgia-born celebrity chef Paula Deen from an interview with Green Global Travel, “Trends come and go, but mama’s cooking will never go out of style.” And, as the economic downturn forced upscale Atlanta eateries—such as Craft, Repast and Joel—to close up shop left and right, a new class of chefs has emerged, seemingly dead-set on putting gourmet Southern cuisine on the international foodie map.Now, even the illustrious James Beard Foundation is taking notice. In May, at a ceremony at the Lincoln Center for Performing Art’s Avery Fisher Hall in New York, local chefs Linton Hopkins (of Buckhead’s critically acclaimed Restaurant Eugene) and Hugh Acheson (of Athens favorite Five & Ten) were named Best Chef Southeast at the annual James Beard Awards.For Hopkins, who had been nominated by the Beard Foundation five years in a row before winning, the award was a welcome affirmation of what local foodies have been saying for years. For Acheson, a world-renowned judge on TV’s “Top Chef” who had been nominated six times in a row, it was another award to go with the one he previously won for his cookbook “A New Turn in the South: Southern Flavors Reinvented for Your Kitchen.”But while Acheson and Hopkins may currently be the most celebrated among Atlanta’s chefs, theirs are hardly the only restaurants making a major splash by updating traditional Southern cuisine for more sophisticated 21st century palates. Here’s a look at some of the city’s best places to find a swanky take on the homestyle, comfort foods that mama used to make. 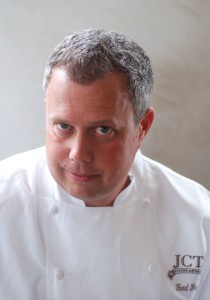 If Ford Fry, chef and owner of JCT. Kitchen and Bar, had a nickname it should be “Mr. Right,” because it seems the inspired restaurateur can do no wrong. This year he opened two new restaurants, serving upscale sustainable seafood at The Optimist and offering a more casual fish camp atmosphere at Oyster Bar. Last year he earned rave reviews for Decatur’s No. 246, a hip Italian joint. But JCT. Kitchen and Bar, which opened in 2007, remains his flagship restaurant, beloved throughout the city for its gourmet comfort food. Perhaps the best way to sample Fry’s savory Southern fare is with his weekly “Sunday Suppers: A Fancy Meat and Three,” in which five meats and nine fresh veggies are served up family style with black skillet cornbread, biscuits and salad. In his announcement of the event, Fry says, “Some of my best family memories are from our Sunday gatherings filled with great food and great fellowship, and I hope that’s what they become for our guests.” Regardless of which night you visit, get there early if you want a taste of his unbelievably tender JCT. fried chicken, which is the stuff of local legend. (1198 Howell Mill Rd., Suite 18; 404-355-2252; jctkitchen.com) 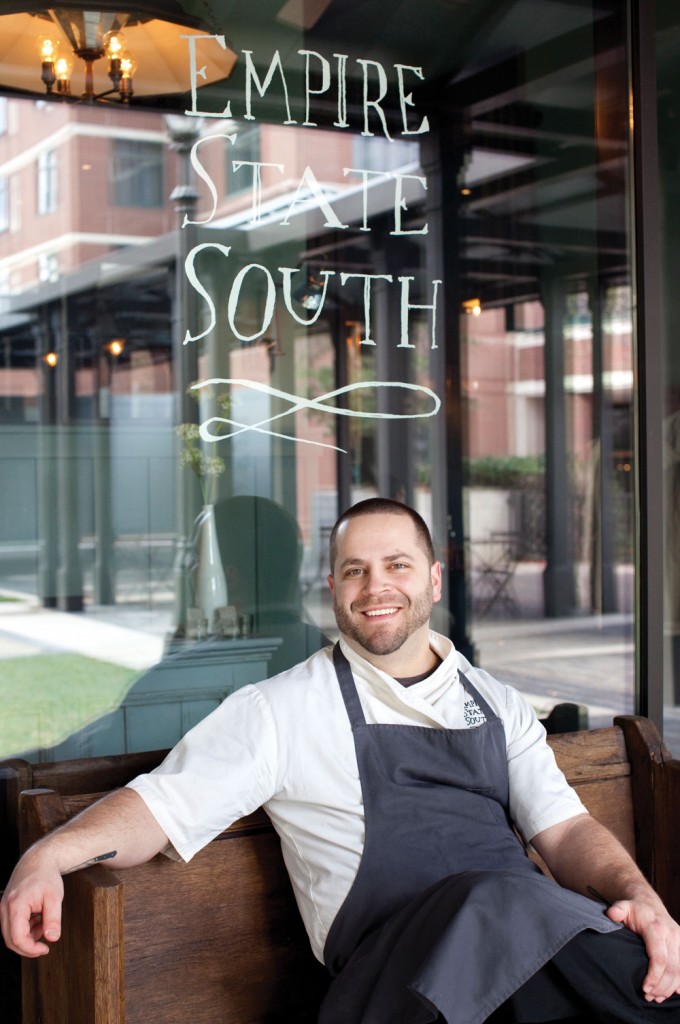 Ranking right alongside Richard Blais among Atlanta’s most famous celebrity chefs, Ottawa transplant Hugh Acheson started his flagship restaurant, Athens’ Five & Ten, back in 2000. His focus on local, sustainable, organic foods earned him major recognition right from the start, with Food & Wine magazine naming him the Best New Chef of 2002, and he now has three successful restaurants in his portfolio (the third, also in Athens, is The National). His first Atlanta restaurant, Empire State South, opened in 2010. Acheson brought in Culinary Institute of America graduate Ryan Smith as executive chef—a canny choice given Smith’s time at the critically acclaimed Bacchanalia and Canoe, as well as his more recent experience working alongside Linton Hopkins at both Restaurant Eugene and Holeman & Finch. Together, Smith and Acheson have crafted an ever-evolving seasonal menu that, to quote Acheson, pays “homage to the history of the region and reflects the diverse cultures that exist in the South today.” Culinary concoctions such as boiled peanut 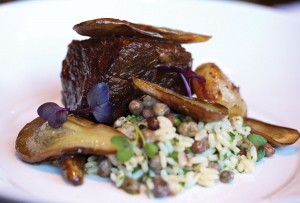 hummus, Border Springs lamb rib with peanut brittle and kimchi rice grits offer an inventive blend of influences. But in their execution, every single risk Acheson and Smith take pays off. The desserts of Cynthia Wong, a two-time James Beard Award nominee, are literally the icing on the cake. (999 Peachtree St., #140; 404-541-1105; empirestatesouth.com) 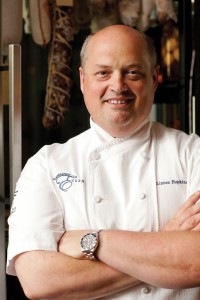 Long before he won a James Beard Award, Linton Hopkins (who also has a stake in the perennially popular Holeman & Finch Public House) was awakening Atlantans to the joys of farm-to-table fare. For Hopkins, the path to great food begins long before the ingredients reach his kitchen, and his menu prominently credits the local farmers and artisans whose products he proudly uses. The Atlanta native is also outspoken about treasuring Southern folk traditions—from the seafood dishes of Georgia’s coastal Gullah communities to the “paleo diet” pleasures of the state’s original Cherokee inhabitants. Hopkins also sits on the board of organizations such as Georgia Organics, the Southern Foodways Alliance, the Peachtree Road Farmers Market and the Southern Food and Beverage Museum. From his Georgia trout and 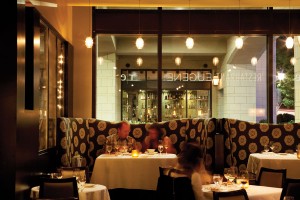 South Carolina white shrimp (with Carolina rice grits) to sorghum-glazed pork belly and summer vegetables, his commitment to fresh, wholesome, locally sourced food comes across in each distinctive dish. Though many other chefs around the city are walking the same culinary path, it’s Linton Hopkins who has been leading the way. (2277 Peachtree Rd.; 404-355-0321; restauranteugene.com)

Miller Union
A semifinalist for the James Beard Foundation’s Best New Restaurant Award, owner and chef Steven Satterfield’s farm-to-table favorite was built on a site once occupied by the Miller Union Stockyards and played a key role in the reinvigoration of Atlanta’s increasingly hip Westside. Few chefs are more outspoken about supporting local sustainable farmers:
Satterfield proudly works with Crystal Organic Farm, Johnston Family Farm, Love Is Love Farms and Moore Farms and Friends (among others), basing his constantly changing menu on that week’s harvest. His seasonal harvest dinners—a three-course prix fixe meal served up family style at a communal table—have become major foodie events, especially among the eco-gastronomic Slow Food Atlanta crowd. It’s easy to understand why once you taste Satterfield’s simple, soulful dishes—such as farm egg baked in celery cream, grit fritters with country ham and Thomasville tomme, and house-made pork sausages with local greens and summer mushrooms. There’s nothing flashy about the chef’s traditional Southern style, but diners will savor it to the last bite like some sort of long-forgotten memory. (999 Brady Ave.; 678-733-8550; millerunion.com)

Chicken and the Egg 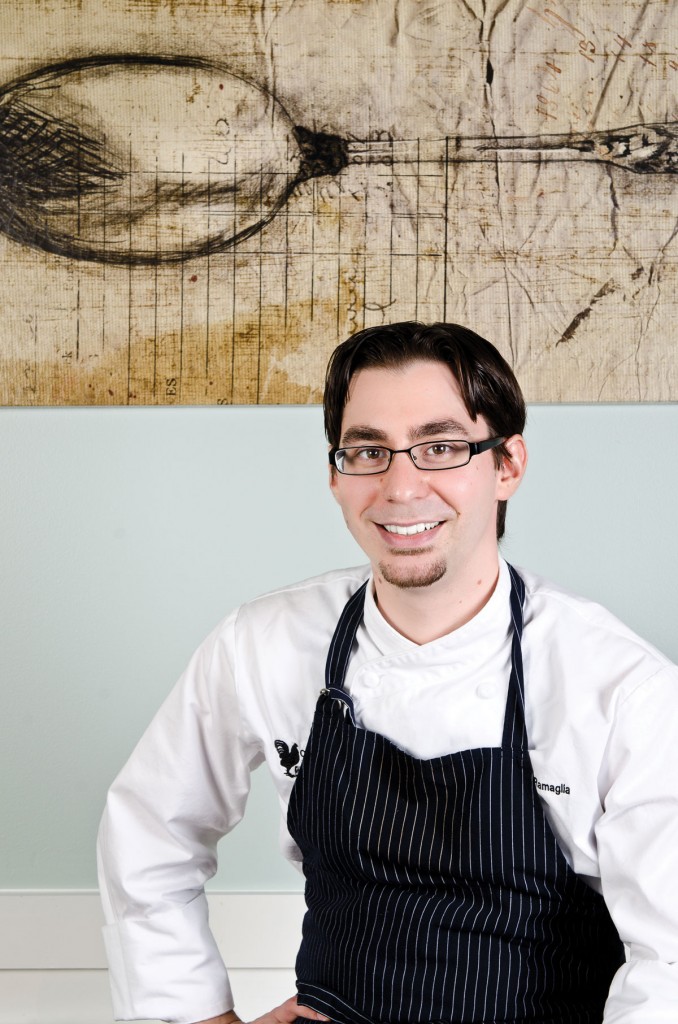 Marietta is best known as the home of Newt Gingrich, the Dobbins Air Reserve Base and a bizarre landmark known as the Big Chicken (basically an old, oversized sign for a KFC). So it should come as no surprise that upscale Southern food is the hottest thing happening on the city’s culinary scene. The first renowned chef to make his mark on the area was Marc Taft, Pacci Ristorante’s former general manager, who opened this modernized tribute to classic farmhouse fare in 2011. Tucked away in a suburban strip shopping center, the place looks fairly nondescript from the outside, but the inside feels like visiting your grandmother’s country farm. Taft wisely brought along several former staff members from Pacci (which was named one of Esquire’s Top 20 New Restaurants in the U.S. in 2009), including Executive Chef Joseph Ramaglia. Together, they’ve crafted a menu that practically drips with sweet Southern tradition. From starters such as pimento cheese fritters with green tomato chow chow and fried chicken livers with caramelized onions and madeira to entrees like fried chicken and waffles, sweet Georgia shrimp and grits, and pork tenderloin with a Jack and Coke glaze, their flavorful dishes will turn even the staunchest northerners into southern-fried food fanatics. (800 Whitlock Ave. Ste. 124, Marietta; 678-388-8813; chickandtheegg.com) 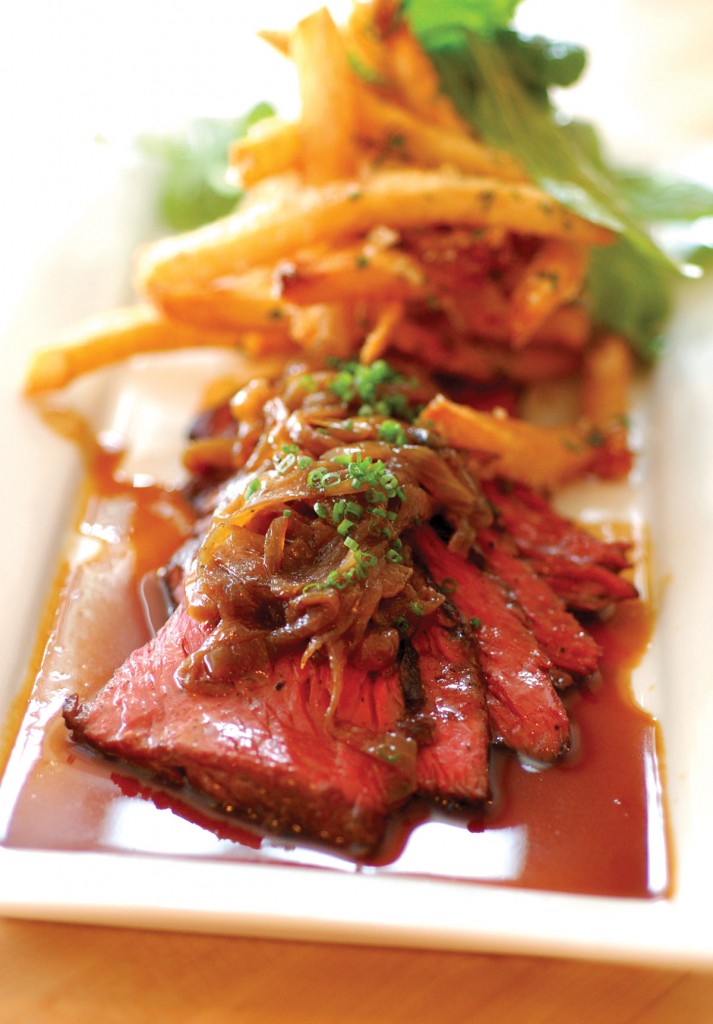 Seed Kitchen & BarIn recent years, Atlanta’s outer suburbs have become packed with foodies ravenous for upscale dining opportunities that don’t require a 30-minute drive. Owner and chef Doug Turbush, formerly of Buckhead’s Bluepointe, filled that niche perfectly when he opened his first restaurant in Marietta’s Merchants Walk shopping center (close to gourmand havens such as Whole Foods and The Cook’s Warehouse) late last year. A refreshing mixture of happening hotspot and laid-back neighborhood bistro, the family-friendly restaurant blends Southern cuisine with a broad range of international influences, showcasing a particular fondness for Asian cuisine. Turbush shows surprising ingenuity in dishes such as crispy pork belly sliders with pickled cucumbers and hoisin sauce, garlic- and thyme-roasted mushrooms served over soft polenta (rather than grits) with truffled pecorino cheese, and New Bedford scallops and pork belly cooked in cider brown butter and served over butternut squash. Like most of the 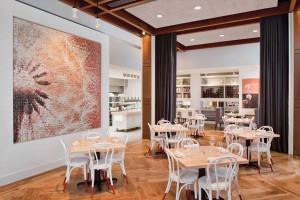 restaurants featured here, Seed Kitchen’s menu changes seasonally, and a huge part of the attraction is not knowing what new items you might want to try. But as Turbush joins the city’s growing vanguard of superb Southern chefs, the adventure of dining out in Atlanta grows more appetizing by the day. (1311 Johnson Ferry Rd., Marietta; 678-214-6888; eatatseed.com)With this gastronomic rebirth, Atlanta has been put back on the culinary map. From culinary connoisseurs to self-proclaimed foodies, Atlanta’s diners are sure to flock to these swanky, Southern-style destinations.