Trains are among the oldest means of modern transport. These metal chariots burst on to the scene in the early 19th century to propel the Industrial Revolution, but many were quickly converted into workhorses for high-end travel experiences, becoming the literal driving force of some of the most iconic luxury railroad lines throughout history.

Trains offer a relaxing, yet engaging, way to see the world. (Courtesy of VIA Rail)

Today, sparked in part by the public’s fascination with the way train transit encourages travelers to slow down and enjoy the ride, new and carefully restored luxury trains offer the ultimate in lavish accommodations. Private quarters often include multiple bedrooms, washrooms with hot-and-cold running water and butler service, as well as exclusive dining and lounge options. The locomotives are essentially ultra-luxe resorts on rails; guests get the same attention to detail that they are accustomed to from sedentary resorts, but with the added bonus of enjoying an adventure along the way.

“Train travel proves the old saying that life is about the journey, not the destination,” says Gary Franklin, managing director of Belmond Trains & Cruises. “The true luxury of train travel is the ability to take your time and slow down in a world where it is increasingly difficult to do so. A journey on a train is a memorable and sociable experience—the lack of modern technology and daily distractions allows for true relaxation and socialization.”

As Franklin explains it, the train world is buzzing in anticipation over the Belmond Andean Explorer, the first luxury sleeper train in South America, which is set to launch next year. This train will wind its way through the Peruvian Andes, taking travelers to remote villages and UNESCO-designated landmarks and terminating at Machu Picchu. Bookings should start in early 2017; until then, here are five other legendary luxury rail experiences to consider. 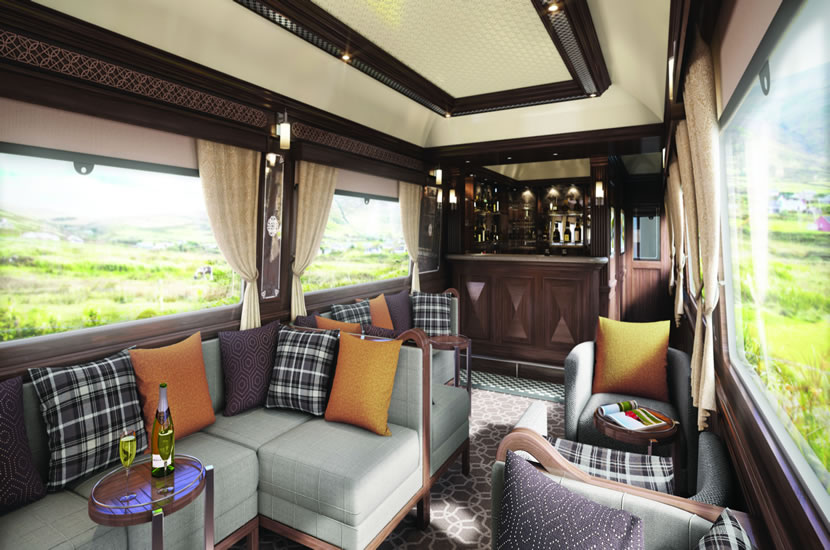 The Belmond Grand Hiberian launched in August. (Courtesy of Belmond)

Until the Andean Explorer arrives, the newest luxury experience from Belmond is the Grand Hibernian, which launched in August. This train represents the first luxury touring train in Ireland, and visits a large portion of the country, providing a luxurious alternative to driving the Ring of Kerry and other popular tourist circuits. Itineraries are available for two, four and six night journeys, and spotlight castles, causeways and everything in between. The two-night tour, The Realm of Giants, heads from Dublin to Belfast and Portrush, and includes an excursion to the Giant’s Causeway and a stop at the Old Bushmills Distillery to discover the secrets of its 400-year-old whiskey. The four-night itinerary, Legends and Loughs, stops at Cork, Killarney, Westport and more; experiences include a tour of the Jameson distillery in Midleton, the Blarney Stone at Blarney Castle and Connemara National Park in Galway.

For these routes, Belmond offers 16 twin and four double cabins; all have en-suite bathrooms, wardrobes, writing desks and large windows that let passengers admire the landscape at it unfolds. What’s more, each carriage of the train is named after an Irish county with cabins decorated to match the county’s traditional tartan. (belmond.com) 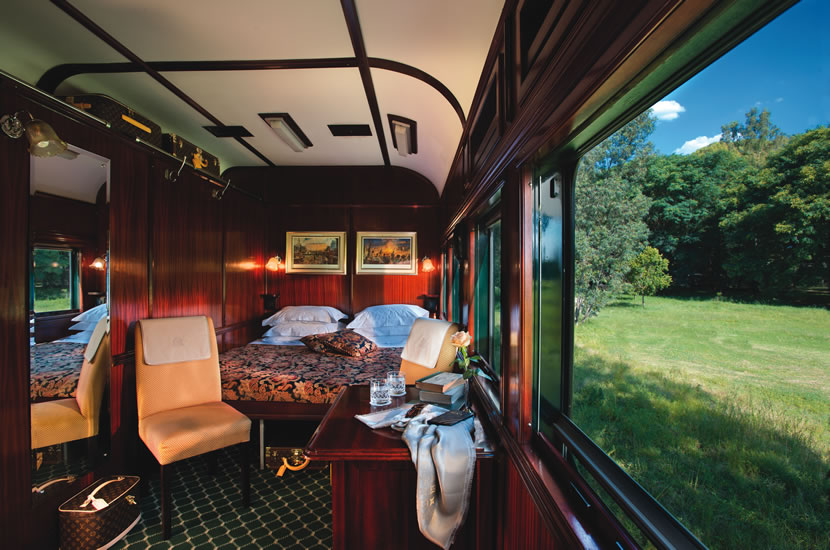 Rovos Rail operates all of its locomotives out of Africa. (Courtesy of Rovos Rail)

Safaris are the name of the game for Rovos Rail, which operates all of its luxury trains in Africa and bills itself as “the most luxurious train in the world.” Because the wildlife and scenery are such an integral part of the experience—especially on the Durban and Namibia safari routes, and on the path to Victoria Falls—many guests spend a good bit of their journeys in Observation Cars, which essentially have floor-to-ceiling windows.

Royal Suites comprise the most indulgent accommodations; each takes up half a carriage and measures about 150 square feet in size. These suites have private lounge areas, full bathrooms with a separate bathtub and shower and double beds.

Three meals are served daily in Victorian-style dining cars and come with a selection of fine South African wines. Traditional dishes, such as game, are a specialty. Off-train experiences include everything from city tours to golf, whitewater rafting, game-viewing and photo safaris. The 15-day Dar es Salaam journey, one of the most famous in the world, includes a bush walk to experience the local wildlife firsthand. Rovos even owns a number of elegant guesthouses where passengers can continue their stay long after they disembark the trains. Journeys vary in length from three days to 15. (rovos.com)

The year 2016 is a special milestone as it marks the 100th anniversary of the opening of the Trans-Siberian line through Russia. The route connects east and west from Moscow over the Urals, speeding across the steppe and along the shore of Lake Baikal, the world’s oldest and deepest freshwater lake.

Top-of-the-line Imperial Suites on the Golden Eagle measure 120 square feet and comprise a large double bed and a lounge area with a dressing table. Each accommodation also boasts a private en-suite bathroom and underfloor heating. Suite guests receive a complimentary bottle of Dom Perignon champagne when they board the train, and have the option of private guides and car service in most of the stops along the route.

The eastbound route—the more iconic of the two—usually runs 15 days. Departing from Moscow, it includes stops in Yekaterinburg, the capital of the Urals; Novosibirsk; Irkutsk, the “Paris of Siberia”; and Ulaan Baatar, where off-train excursions include village visits and are designed to introduce passengers to Mongolian life. (goldeneagleluxurytrains.com) 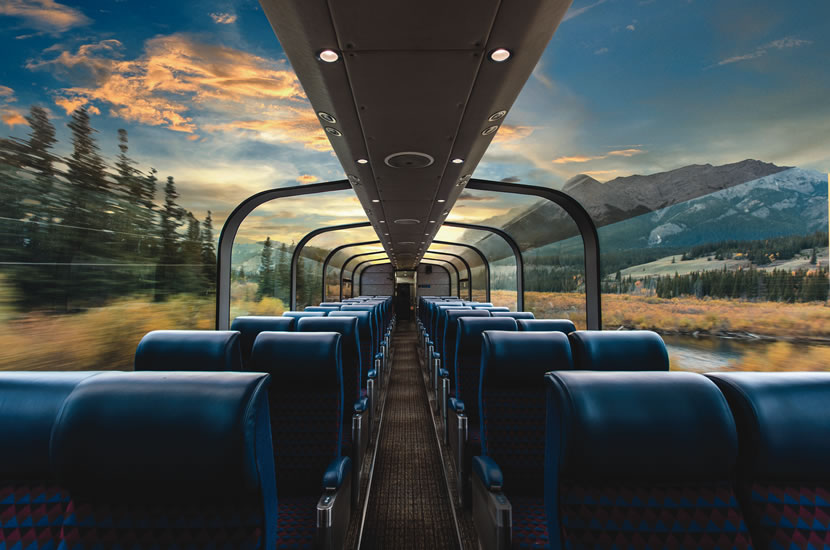 VIA Rail is Canada’s national railroad and stretches from Toronto to Vancouver. (Courtesy of VIA Rail)

Prestige Class on VIA Rail Canada

VIA Rail is Canada’s national railroad, providing breathtaking service from Toronto to Vancouver (and beyond). The top-of-the-line class for this experience is Prestige on The Canadian, which launched in the spring of 2015. It features sitting rooms that turn into bedrooms, personal concierge service, private washrooms with showers, activities for children and more.

When the rooms are converted into bedrooms, the double-sized bed looks straight out the window at the prairie fields, rugged lake country, picturesque towns, and snowy peaks of the majestic Rockies as they pass; the beds are perfect spots from which to watch the landscape reveal itself.

Passenger rates include bar service, restaurant-quality food showcasing regional specialties and reserved seating in the exclusive Prestige Park Car, which features panoramic views of the passing countryside. Prestige tickets also grant guests front-row seats for complimentary activities such as wine tastings and interactive talks on local history, geography and culture. The VIA experience is more about the journey itself and less about off-train activities. That said, stations in both Toronto and Vancouver sport posh lounges, and guests traveling in the Prestige class have access to both. (viarail.ca)

This train is one of the most luxurious in India. It stretches nearly a half-mile long and recreates the lavish lifestyle of a royal era. Trips range in length from four to eight days; most originate in Delhi and include a stop at the Taj Mahal. Experiences range from visits to the dinosaur fossil parks at Balasinor to participating in an elephant polo match at Jaipur and even meeting a member or the Indian royal family.

The train’s Presidential Suite, Navratana, measures 448 square feet—almost unprecedented for a railroad. This space is like a palace on wheels. It is divvied up into a living room, two bedrooms and a washroom with running hot and cold water. Rates for the suite include all meals, beverages and access to a complimentary minibar. Navratana guests also have a 24-hour personal valet, as well as guided off-train excursions in an exclusive car with an independent guide.

The Maharajas Express also offers four smaller suites—Express Suites—which are about half the size of the Presidential. The train features two bars which offer a range of wines and spirits. Two on-board fine-dining restaurants, Mayur Mahal and Rang Mahal, are elegantly decorated and provide a range of Indian and international cuisine; both options offer seating for two or for four. (the-maharajas.com)