Anchored by Washington Square Park, Greenwich Village, known by locals simply as the Village, has historically been an enclave of artists and bohemians, from Mark Twain to Edna St. Vincent Millay and Andy Warhol. This legendary neighborhood, home to New York University and a number of A-list celebrities, is a must-visit.

In the 1950s and 1960s, it was a center of counterculture and political rebellion. The area inspired the art and writing of the likes of Bob Dylan, Jack Kerouac and Maya Angelou. Despite its status now as one of the most desirable residential areas in Manhattan, Greenwich Village holds onto its history and character. Musicians still play in renowned clubs, filling the nights with jazz, reggae, blues and more. Emerging playwrights continue to present their work at the area’s landmark Cherry Lane Theatre, opened in 1924 and the oldest continuously running off-Broadway playhouse.

The neighborhood is a stark contrast to the sleek high-rises nearby. Shorter buildings let in more sunlight and the architecture ranges from vine-covered Greek Revival townhouses to classic brownstones and ornamental Queen Anne styles. It has narrow, meandering streets, some cobblestone and many tree-lined, that don’t follow the city’s grid. Between Soho and Chelsea, it’s bordered on the east and west by Broadway and the Hudson River.

While some chain stores can be found, you’ll find plenty of specialty shops that have been around for decades, like Generation Records, Murray’s Cheese Shop and Three Lives & Company, a one-of-a-kind bookshop and community hub around the corner. And its centerpiece, the 72-foot marble Washington Square Arch monument leads you into Washington Square Park, where you can relax by an impressive fountain or try your hand at a game of chess at one of the park’s stationary chess tables.

Wander the streets in the footsteps of history and Greenwich Village will surprise and delight you with its myriad charms and stories.

1. “… The newly revamped menu at Acme [now a contemporary bistro] and the Acme Downstairs lounge are a fun combination …” says Carmen da Silva, chef concierge of the Soho Grand Hotel. “The dark interior provides a romantic setting … and the downstairs lounge offers an elegant late-night hideaway that attracts an in-the-know local crowd with both their resident DJs and their well curated cocktails.”

2. For inventive Mexican food, visit Empellon Taqueria. “The short-rib pastrami with pickled cabbage or the Brussel sprouts with toasted almonds tacos are some of the most delicious and unique offerings.” Plus, they serve “creative tequila or mezcal-based creations like my favorite, the ¿Porque No? [Cimarron Blanco, fresh pineapple, cilantro, serrano tincture],” da Silva adds.

3. Restaurateur Joseph Marazzo opened Virgola, a 20-seat, six-foot-wide wine and raw bar. It’s got an “amazing oyster happy hour in a super tiny French alleyway setting complete with lovers’ locks dangling from the gated entry.” The romantic spot is first-come, first-serve—the restaurant neither accepts reservations, nor lists a phone number on its website.

4. The Happiest Hour is a midcentury Miami-style locale with painted palm trees and coral pink globe lights. Da Silva says that the lounge serves “such a great burger,” which has been made famous thanks, in part, to Instagram. The drinks menu has classic and signature cocktails like the Belle of the Ball, which blends red pepper, lemon, habañero, as well as your choice of tequila, mezcal or gin.

5. For classic Greenwich Village entertainment, “take in some live jazz at any one of the Village’s established jazz clubs, including Smalls [Jazz Club] and their newest sister club Mezzrow.” With the feel of a speakeasy tucked away in a basement, Smalls is a no-frills, cozy spot decorated with music memorabilia.

6. Mezzrow, also an intimate venue preferred by da Silva, is named for Milton “Mezz” Mezzrow, a famous jazz clarinetist. The listening room and lounge that bears his name draws in some of the greatest jazz pianists in the city, who play on a Steinway & Sons concert-sized grand piano.

7. Jazz lovers have plenty of other options in the Village, including “renowned NYC favorite Blue Note.” You’ll be sitting nice and close to your fellow music lovers at this jazz destination, where stars like Stevie Wonder, Liza Minnelli, and Tony Bennett have taken the stage.

8. “Marie’s Crisis [Cafe] is a hidden gem of a show tunes piano bar near the equally gay-friendly institution, The Stonewall [Inn]. Stop in for a beer and listen or sing along to everything from the current hits from Hamilton to the deeper cuts of bygone off-Broadway shows.” 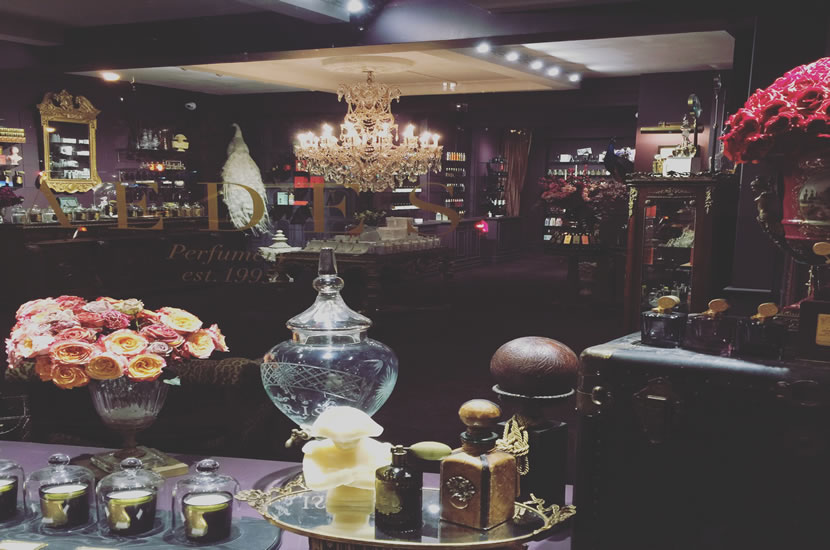 9. Aedes Perfumery “has an amazing and unique selection of luxury fragrances,” da Silva says. The boutique perfumery is decorated with plenty of flowers, a white (stuffed) peacock, and a large sparkling chandelier. The helpful staff are ready to give recommendations and samples to inquiring patrons.

10. “Opened by the owners of the now-closed gift and home decor shop Mxyplyzyk, Kikkerland is one of the best spots for shopping,” da Silva says. The quirky flagship store stocks funky, fun gifts, gadgets, stationery, a plethora of eye-catching home goods and more.