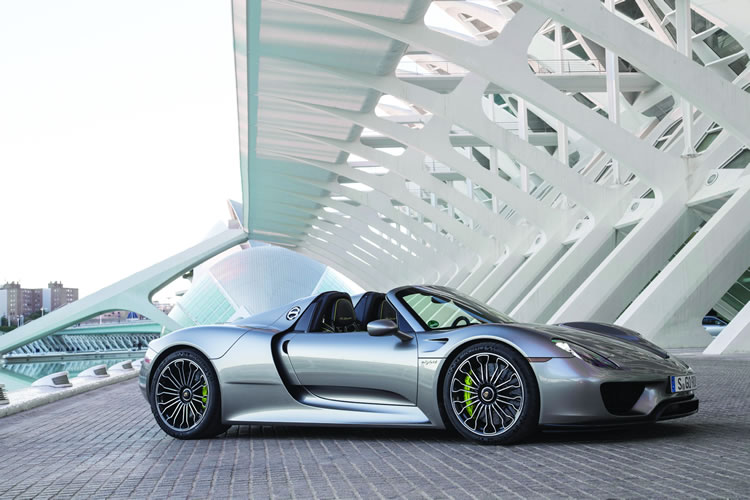 The hybrid Porsche 918 Spyder boasts two electric motors and a 4.6-liter gas tank, which combine for a mammoth 887 horsepower.

The convertible returns with sleek styles that make driving in open air all the more liberating.

Convertibles nearly went the way of the dinosaurs a few decades ago. Saved from the brink of extinction, ragtops have slowly but surely made their way back into the driving lineup of almost every major brand. It’s de rigueur these days to have at least one drop-top in a premier car collection, and each coming year brings the launch of dramatic new air-in-your-hair models that feature the latest styling, performance and technical innovations.

Ragtops and driving have always gone hand in hand. Although the first power-operated, retractable roofs did not appear until the 1930s, the earliest automobiles were open-topped vehicles—some of them equipped with detachable canvas, leather or cloth roofs. The first hardtops didn’t come along until 1906, when Cadillac introduced the first closed-body passenger vehicle with a permanent roof. Ironically, these early hardtops were called “convertibles” because they converted the passenger cabin into an enclosed space protected from the elements. 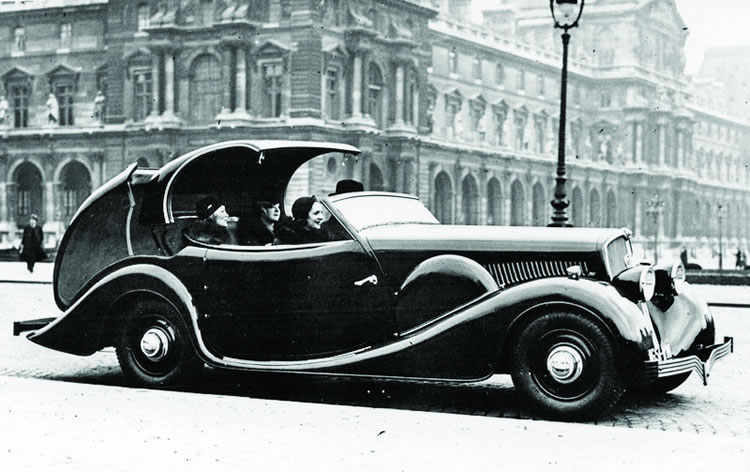 While hardtops would surpass open-top cars in overall sales, convertibles continued to carry a certain cache—a much more glamorous means to travel from point A to point B. From Clark Gable’s 1935 Duesenberg Model JN convertible coupe and James Dean’s silver Porsche Spyder to Marilyn Monroe’s sexy black Ford Thunderbird and Marlene Dietrich’s 1929 custom Rolls-Royce Phantom I convertible, stars were often seen (and photographed) cruising around Tinseltown with the wind in their hair.

Politicians and royalty around the world also favored convertibles. Teddy Roosevelt’s open-topped 1907 Stanley Steamer was the first official White House automobile. The first vehicle built specially for presidential use was also a ragtop: Franklin D. Roosevelt’s beloved “Sunshine Special,” a 1939 Lincoln V-12 convertible limousine. Over on the other side of the Atlantic, British monarchs have a long love affair with open air that started when Queen Victoria’s son (the future King Edward VII) purchased a 1900 Daimler Phaeton with a detachable roof.

Yet, by the 1970s their popularity had waned in favor of T-tops (an automobile roof with a removable panel on each side) and sunroofs to the point where Cadillac proclaimed its 1976 Eldorado the “last American convertible.”

It wasn’t until the turn of the 21st century that convertibles started their comeback, thanks to better economic times and technology that made removing and replacing the roof much easier than in bygone years. Online auto expert Edmunds.com today currently carries 61 ragtop reviews, nearly as many as it does hardtops.

“And I keep hearing things from manufacturers about how they’re going to make new convertible models out of their existing coupes,” says Edmunds automotive editor Mark Takahashi.

The convertible explosion is especially noticeable at the luxury end of the spectrum, where models like the Jaguar F-Type, Audi RS5 Cabriolet and the reincarnated Corvette Stingray are all at once head-turners and technological marvels. 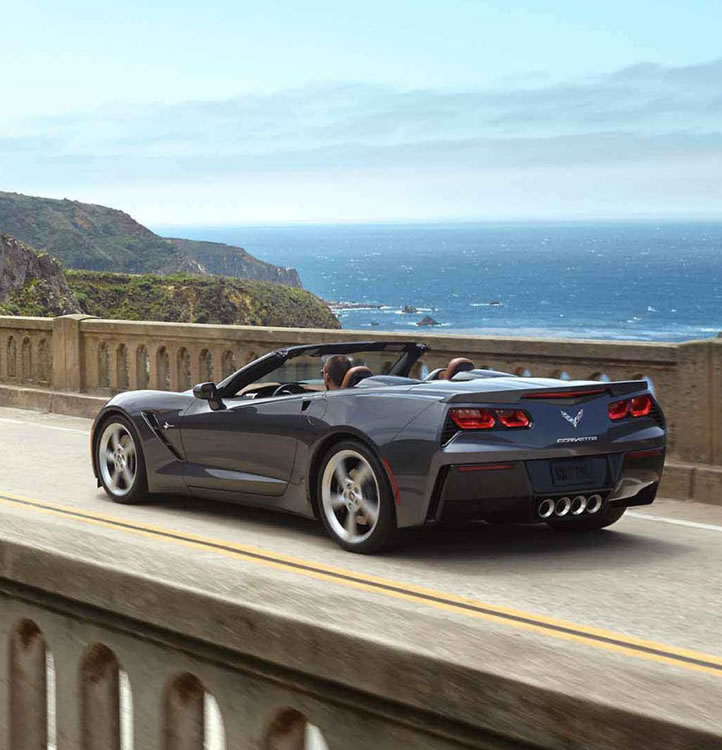 “Technology has made convertibles better than they were 10 or 20 years ago,” Takahashi says—especially when it comes to aerodynamics. Convertible drivers of the past were plagued by excessive wind and ambient noise that made it almost impossible to carry on a conversation while the car was cruising down a highway. This misfortune occurred because airflow generated by the forward movement eddies around the rear of the vehicle and sweeps forward into the passenger compartment.

“This creates a huge vortex, tossing your hair all over the place and making it hard to talk,” Takahashi continues. “But carmakers have figured out a lot of the aerodynamics, and how the air leaves the back of the car, so they’re cutting down on that buffeting. Some manufacturers actually have these windscreens or perforated screens that go up behind the seats and block that buffeting from hitting the passenger compartment.”

Another recent technological advancement is a retractable hardtop roof that is both reliable and easily deployed at the touch of a dashboard button. Unlike the retractable roofs of old that were mechanically unreliable and took minutes rather than mere seconds to shift, these new high-tech tops make convertibles a practical driving alternative in any climate.

A sterling example of the 21st-century convertible is the new Jaguar F-Type, particularly the V-8 S version with a 5-liter supercharged engine that kicks out 495 horsepower and a peak torque of 460 pounds per foot. That translates into a top speed of 186 mph and acceleration from zero to 60 in just 4.2 seconds.

Among the F-Type’s many standard features are an electronic active differential that automatically varies the power delivery to each wheel to help keep the car stable; a high performance braking system; leather sports seats; a rear spoiler that automatically deploys at speeds above 60 mph in order to reduce lift; and dynamic mode software that sharpens throttle response, increases steering weighting and allows the driver to perform gear shifts more quickly at higher speeds.

Available in four colors, the Jaguar’s fabric top is woven from composite materials designed to reduce wind and road noise. It can be raised or lowered in 12 seconds at speeds as high as 30 mph. A 10-speaker Meridian audio system ensures great sound whether the top is up or down, and an optional wind deflector behind the helps reduce wind noise in the cockpit when the top is down.

“The F-Type is a sports car that is true to Jaguar’s design values—beauty of line and purity of form,” says Ian Callum, Jaguar’s director of design. “The exterior maintains Jaguar’s own elegance in its horizontal proportion and rounded surfaces, yet it looks very dynamic. But I would like to say the interior design is even more attractive. It is clearly driver-oriented. No design project has given me greater pleasure than the creation of the F-Type.”

Also new this year is Bentley’s Continental GT V8 S convertible. A throwback to the golden age of touring, this super luxury ragtop easily accommodates four passengers and their road trip luggage. A brawny V-8 engine pushes the car to more than 190 mph and from zero to 60 in 4.7 seconds.

The Bentley’s four-layer insulated roof folds down at the flick of a switch, while the aerodynamic design and low-ride height helps channel airflow over and around the body and away from the passenger cabin. Sports suspension and steering make the Continental GT a pleasure to drive; the optional sports exhaust system and its revised pipe architecture make it even more possible to hear the purr of the twin-turbocharged V-8 engine when the top is down.

Audi has also created another all-weather convertible—the sleek RS5 Cabriolet. Its fabric roof folds into place a little bit slower than the F-Type (17 seconds), but drivers can deploy the top at a slightly higher speed (31 mph). Made from high-tech materials that offer both thermal and acoustic protection, the roof helps make the passenger compartment nearly as warm, cozy and quiet as a hardtop Audi.

“The RS5 is pretty fun too,” Takahashi says. “It’s got great performance, it’s very comfortable and makes a wonderful noise out of the exhaust. The Audi 5 line is actually pretty good all the way across. That kind of performance puts it right up there with the BMW M6.”

Porsche is in the midst of launching several new soft-top models. The one the motoring world is talking about, however, is the limited edition 918 Spyder, a high-powered machine that was designed from the ground up rather than based on a previous Porsche sports car.

As the self-proclaimed “gene pool for the Porsche sports cars of the future,” the 918 is a plug-in hybrid that sports a 4.6-liter gasoline engine and two electric motors powered by a lithium ion battery—combined output is a mammoth 887 horsepower. In pure electric mode, the vehicle reaches a top speed of 93 mph; running on gas, it maxes out at around 211 mph. The 918 also bears the distinction of being the first street-legal vehicle to lap the legendary Nürburgring track in Germany in less than seven seconds. 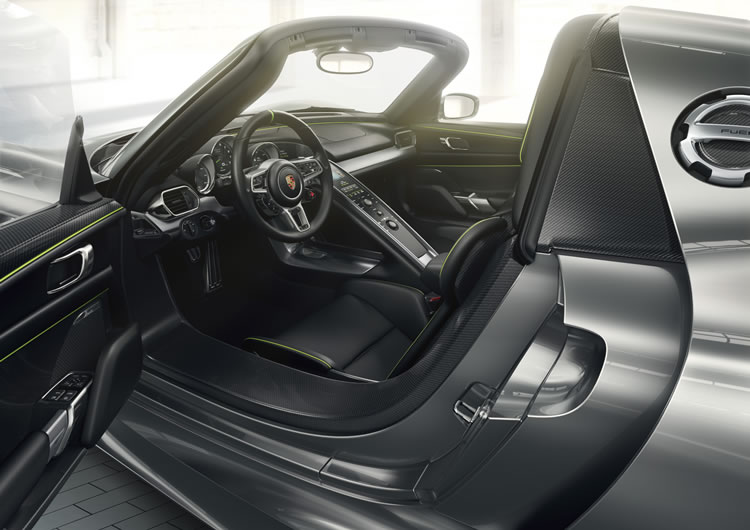 Much of the technology developed by Porsche racing in recent years has gone into this car, including a body structure fashioned from carbon fiber reinforced polymer and front/rear crash elements that automatically reduce the energy of a collision. Opting for a completely different drop-top option than the F-Type, the 918 features a two-piece Targa roof that must be manually removed, folded and stored in the front trunk.

The most talked about convertible manufactured on the other side of the Atlantic is the reborn Corvette Stingray. The original Stingray, introduced in 1963, became a pop culture darling and is still considered one of the most stylish American cars of all time. The Stingray name disappeared in 1982 and remained on the shelf until this year, when the seventh-generation Corvette was launched in North America. With a V-8 engine under the hood and race-worthy aerodynamics, the stunning driving machine is carved from lightweight carbon fiber and composite materials rather than fiberglass or steel like the old Corvettes.

Takahashi also praises the reincarnated Stingray: “This new Corvette is the best they’ve ever made,” he says. “Incredible performance—way more comfortable than before. The styling is sharper; the interior is much nicer. The seats don’t rock back and forth because they’re made out of stronger materials now. It’s a stunner—still turning heads after all these years.”

As the summertime approaches, there’s all the more reason to drive with the top down and the warm breeze passing through. And with all the same amenities and dynamic design as its closed-top counterparts, the convertible will surely have drivers looking twice as it roars down the road.