From “Dr. No” to “Skyfall,” James Bond films over the last 50 years have co-starred some of the most seductive cars ever built.

It often begins with a chase. An epic high-speed pursuit that careens from one hair-raising death-defying maneuver to another before reaching a bombastic resolution rife with explosions, crashes and exchanges of weaponry, with the hero inevitably driving off, his car largely intact, en route to seduce some femme fatale and/or vanquish his next opponent.

And that’s just before the film’s opening credits begin to roll.

Throughout the last half century, the world’s most famous cinematic secret agent—that’s “Bond, James Bond”—has piloted just about every manner of vehicle ever conceived, from a helicopter, fire engine and jet pack to a snowmobile, Russian tank and even a lunar rover. Still, it’s 007’s seemingly endless fleet of exotic cars—in some instances they’re virtually disposable within the context of the storylines—that are the movies’ un-credited co-stars. 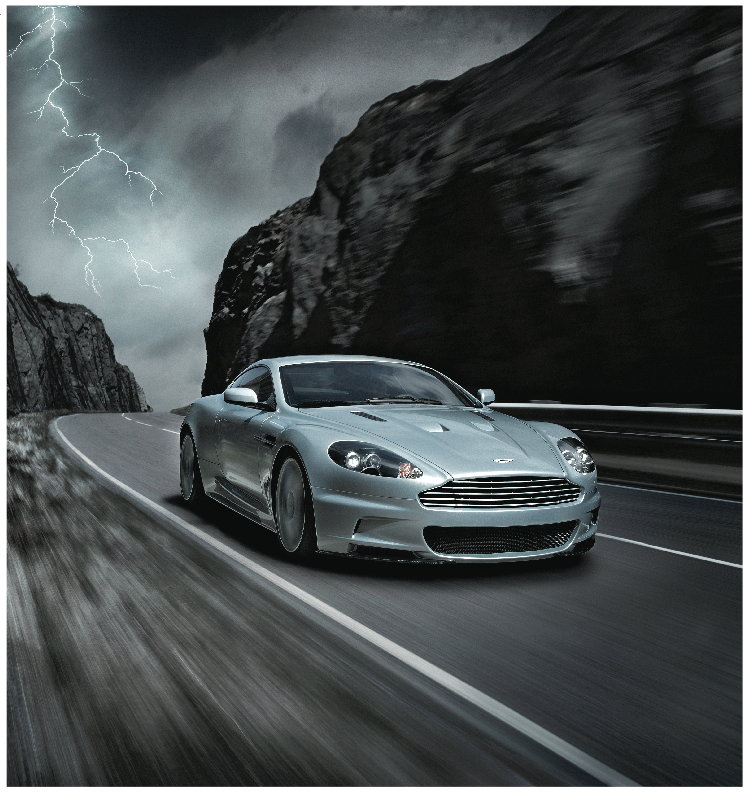 In many of the films “Q,” the fictional head of the British Secret Service’s research and development division, diligently customizes Bond’s rides with an amazing array of vehicular armaments and gadgetry. Whenever the need—not to mention the plot—dictated, Bond could elude and subdue his pursuers with machine guns, smoke screens, rocket launchers, oil slicks, tire shredders and even “adaptive camouflage” that could render a vehicle effectively invisible at the touch of a button. While such items have yet to be made available in today’s cars, at least one futuristic gizmo that was a mainstay in 007’s classic rides from the early films has become widespread, namely the mobile telephone.

To coincide with the 50th anniversary of the James Bond film franchise, and with “Skyfall,” the 23rd movie from EON Productions currently in production, the National Motor Museum in Beaulieu, England, is staging an exhibition of 50 of the greatest 007 vehicles. Called “Bond in Motion,” the retrospective runs through December 2012 and is said to be the largest of its kind anywhere in the world. In addition to iconic vehicles like the Aston Martin DB5 Sean Connery drove in “Goldfinger” and the Lotus Esprit Roger Moore took underwater in “The Spy Who Loved Me,” the exhibition features oddities like the Parahawk-powered parachute flown by Pierce Brosnan in “The World is Not Enough” and the SFX Cello Case Ski adeptly navigated by Timothy Dalton in “The Living Daylights.”

The National Motor Museum is situated in the south of England, in the New Forest area between Bournemouth and Southampton, about 87 miles southwest of London. For those not fortunate enough to be able to travel to the museum to see the “Bond in Motion” display firsthand, we’re bringing a taste of it to you. Here’s a look at what many movie buffs consider to be among the best 007 vehicles of all time. 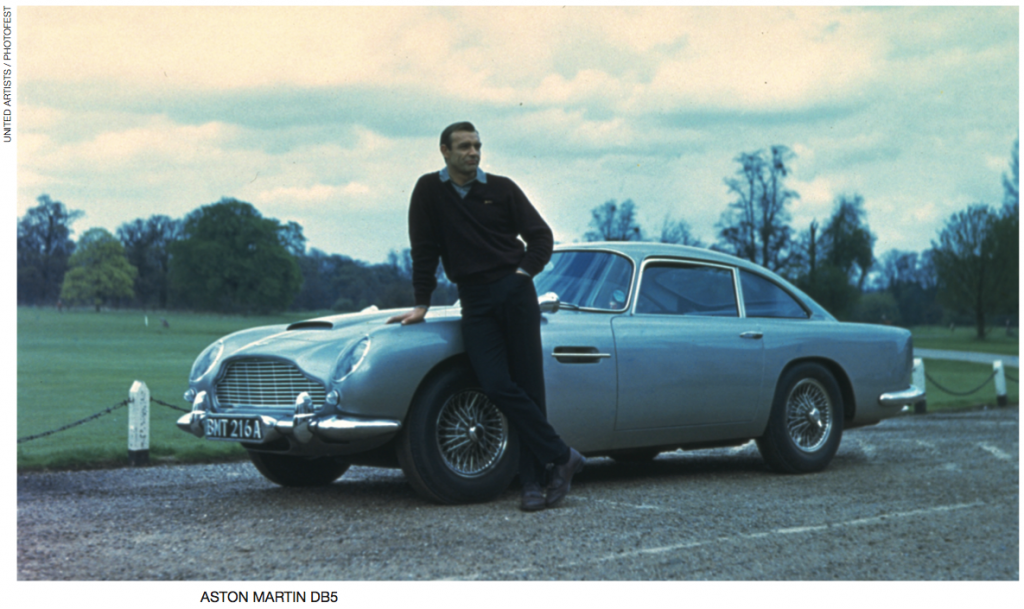 First seen in the 1964 film “Goldfinger,” the venerable DB5 is arguably the car that’s most clearly, inexorably linked with James Bond. A luxury grand touring car produced between 1963 and 1965 that came powered by a 282-horsepower 4.0-liter engine, the DB5 packed many then-upscale amenities like reclining seats, wool pile carpets, electric windows, chrome wire wheels, full leather upholstery and even a fire extinguisher. The DB part of the car’s name stands for David Brown, who owned Aston Martin throughout much of its post-WWII glory days. 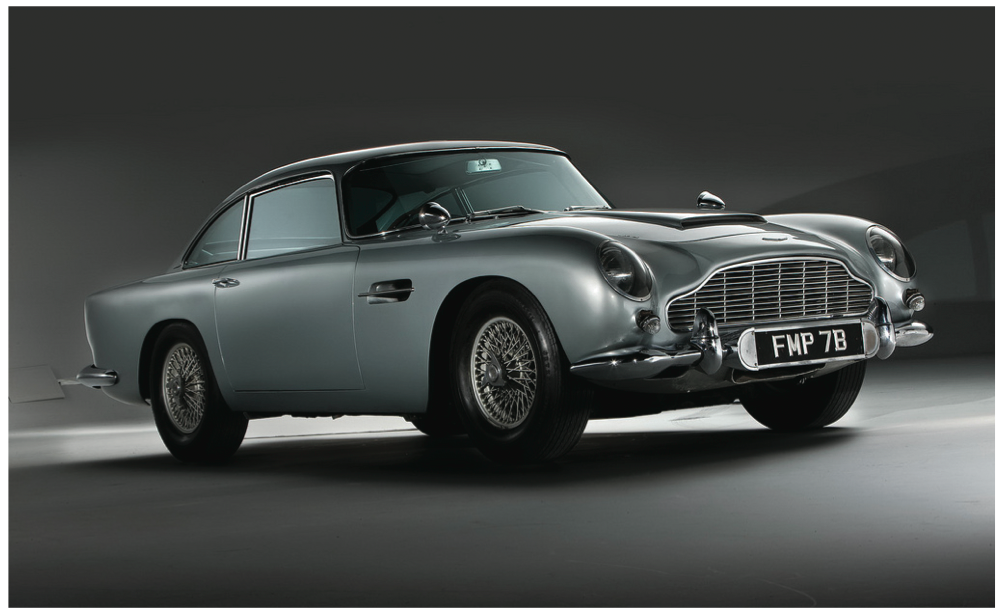 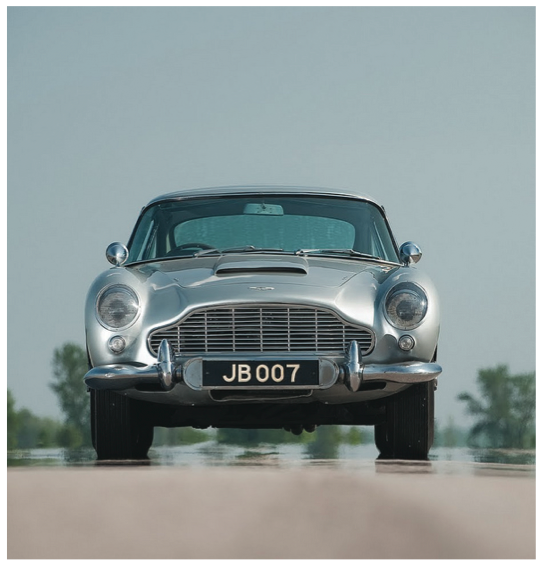 Bond’s version featured such handy accessories as a front-firing machine gun, passenger-ejection seat, smoke screen, oil slick dispensers, a bulletproof barrier, revolving multinational license plates, and front and rear retractable ramming arms. Perhaps in a nod to the chariot race scene in the movie “Ben Hur,” it also came with extendable wheel hubs that could disable an adjacent vehicle by slashing its tires. The durable DB5 also saw duty in “Thunderball” (1965), “GoldenEye” (1995), “Tomorrow Never Dies” (1997) and “Casino Royale” (2006), and even was used as the basis for the spy character Finn McMissile in the 2011 animated film “Cars 2.”

Another old-school British club-like car, the original DBS was featured in 1969’s “On Her Majesty’s Secret Service”—the only film in which George Lazenby portrays 007. The latest iteration was Daniel Craig’s ride of choice as Bond in the 2006 version of “Casino Royale” and the subsequent 2008 installment, “Quantum of Solace.” Unlike the gadget-laden DB5 above, the Aston Martin DBS featured in either film stands on its own merits without being retrofitted with assorted armaments.

Both elegant and aggressive, the current DBS is Aston Martin’s flagship model and offers a stunningly modern take on its predecessor’s old-money British sports car styling. Available as a closed-roof coupe or Volante convertible, the DBS packs a hand-assembled mid-mounted

6.0-liter V12 engine that brings a full 510 horsepower to the pavement. In “Casino Royale,” the car performed a record-breaking seven-roll stunt maneuver after which it was cannoned into the air. Three models were reportedly destroyed during the filming. 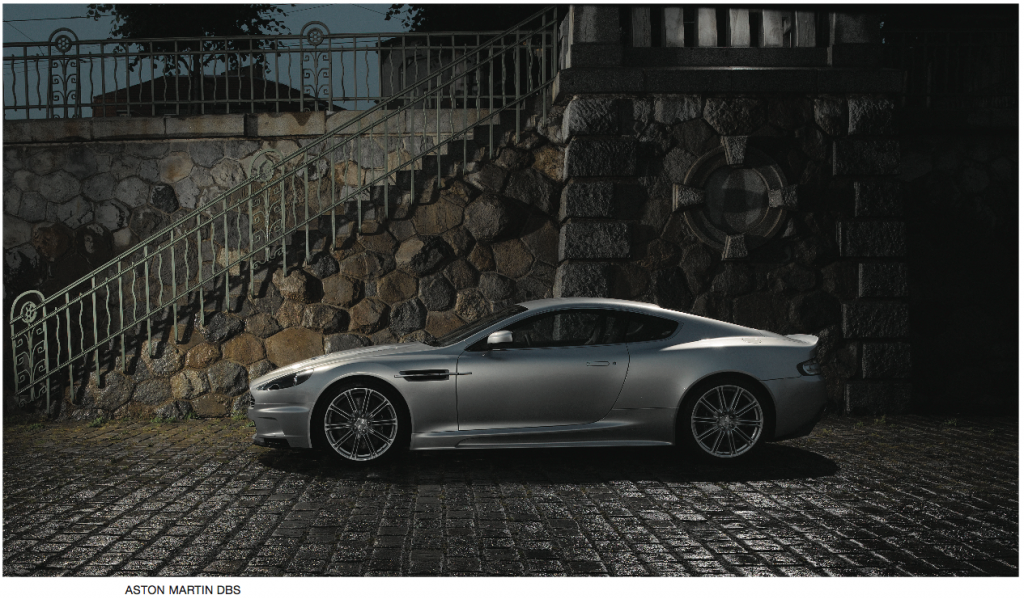 Perhaps Bond was beginning to feel his age in the 1997 release “Tomorrow Never Dies” with Pierce Brosnan’s 007 taking to the wheel of BMW’s flagship 750iL sedan, which, then as now, is more typically seen populating country club parking lots than it is traversing the globe on the secret agent circuit. And at that, in the movie’s signature chase scene, Bond isn’t behind the wheel at all, but rather is driving the car while hunched in the back seat—not to mention engaging all manner of weaponry, including flash grenades, tear gas, rockets and a metal spike dispenser—using his specially modified Ericsson cell phone as a remote controller. The chase ends with the BMW sailing off the roof of the building (with 007 leaping from the car just in the proverbial nick of time) and crashing into a rental car facility across the street as an onboard system voice says, “Congratulations on a safe journey.” Fifteen BMW 750is were reportedly destroyed in the making of the film. 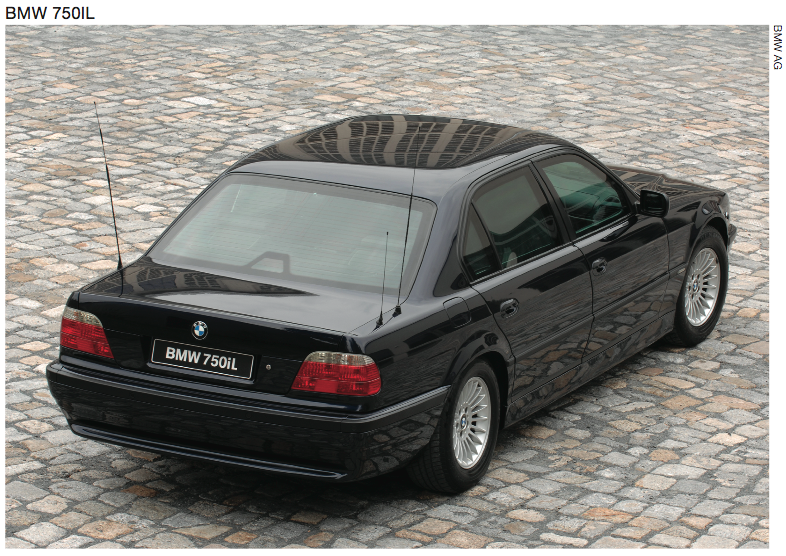 The first car to come from Q Division that had four doors, the 7 Series remains BMW’s ultimate expression of luxury. The “L” in the nomenclature indicates it’s the long-wheelbase version that features additional rear-seat legroom and is often employed as an executive car. The current generation features a 400-horsepower V8 engine in the only slightly renamed 750Li and a rip-roaring 535-horsepower twin-turbocharged 6.0-liter V12 in the top 760Li model. While the 7 Series is decidedly plush, it’s traditionally one of the most pleasurable to drive large luxury cars on the road, with well-balanced ride and handling qualities. The present generation also includes a V8-powered gas/electric ActiveHybrid7 version for wealthy environmentalists. 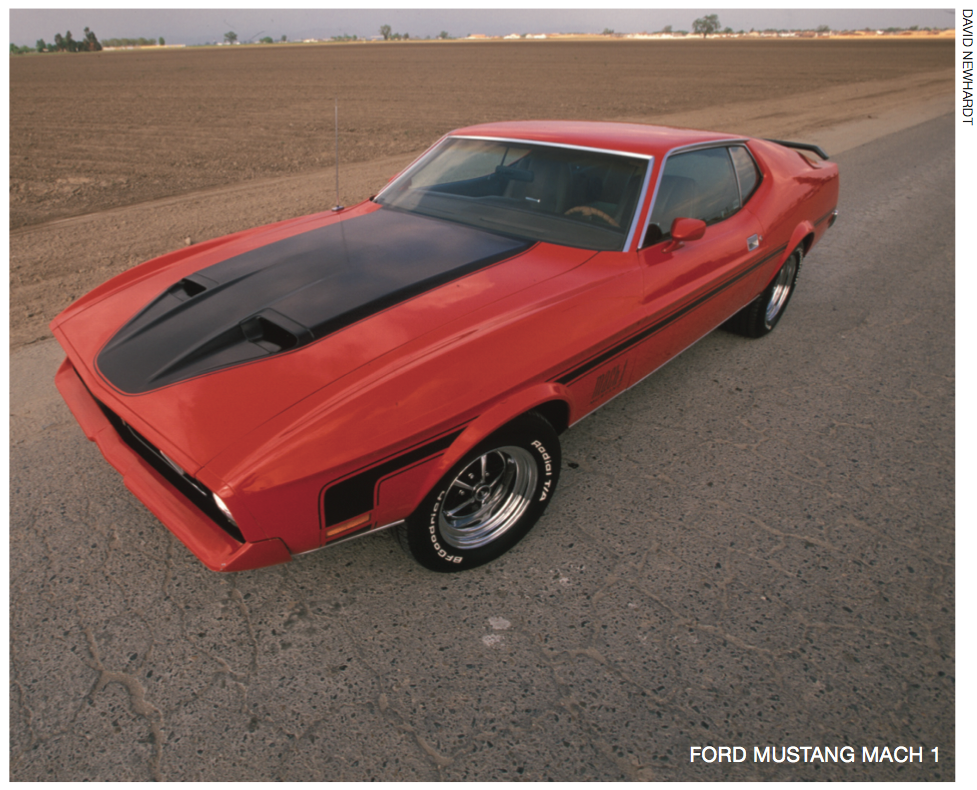 “Diamonds are Forever” (1971) marked Sean Connery’s return to the Bond series after a one-film hiatus. A tale of international espionage punctuated with beautiful women and fast cars, the most prominent of the former being diamond smuggler Tiffany Case (played by 1970s bombshell Jill St. John) and the latter a 1971 Ford Mustang Mach 1. In the process of preventing the villainous Blofeld from controlling the world using orbiting lasers, Bond commandeers Case’s Mach 1 to out-maneuver pursuing police cars in a Rat Pack-era chase down the Las Vegas Strip, leaving assorted collisions in its wake. The sequence’s signature maneuver is an extended escape down an otherwise too-narrow alleyway with the Mustang somehow squeezing through on only two wheels.

While Ford may not have recommended drivers try that trick at home with the stock Mustang Mach 1, the sports coupe was an impressive performer in its own right. In production from 1969 – 1978 and available as a dramatically styled fastback model, the Mach 1 offered a choice of no less than four V8 engines, with the top power plant being a 429 Cobra Jet Ram Air version that was a mammoth (even by classic muscle-car standards) 7.0 liters large. Suspension upgrades helped the Mach 1 hold its own through the corners and by all accounts made the aforementioned high-speed run on two wheels at the hands of a highly skilled stunt driver.

As seen in 1977’s “The Spy Who Loved Me,” the low-slung Lotus Esprit served double duty as an on-road sports coupe and a compact submarine. Thanks to special engineering courtesy of Q, Roger Moore’s 007 takes the Esprit deep below the surface to engage in a reconnaissance of the villain’s underwater facilities. As if that’s not enough, the Esprit was also handily equipped with anti-aircraft missiles, which Bond subsequently uses to blow a helicopter out of the sky. For its submerged skills, the cinematic version of the vehicle earned the nickname “Wet Nellie.” 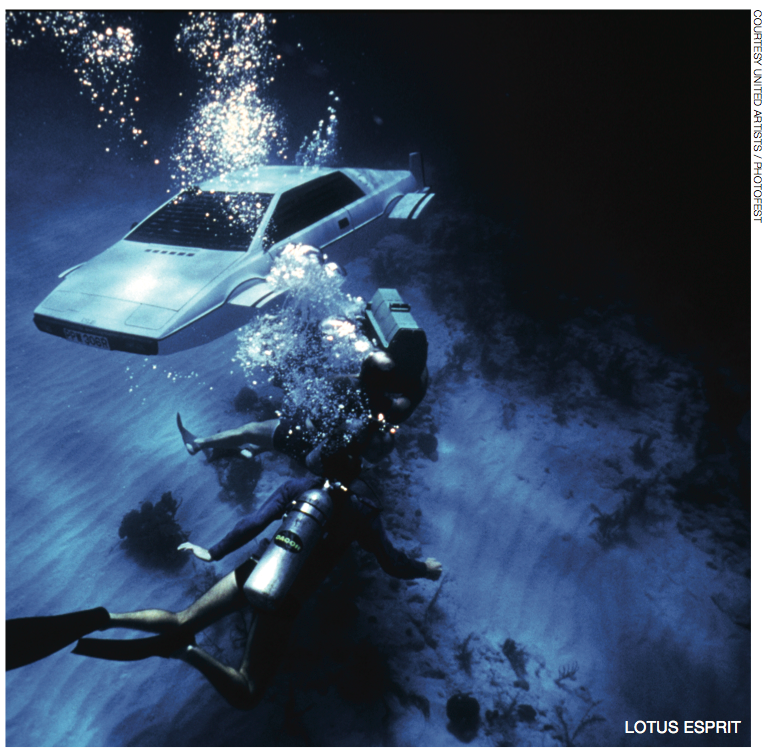 Meanwhile, the road-going version of the wedge- shaped Esprit was manufactured from 1976 – 2004, with the first generation, dubbed S1, being the model featured in the film. It came powered by a rear-mounted 2.0-liter engine that generated a modest 140 horsepower in its U.S. configuration. While it wasn’t particularly fast, the lithe and lightweight Esprit made up for a lack of power with its tenacious handling abilities.

What car might be next for James Bond to ride into another tale of intrigue? Internet reports suggest Daniel Craig’s 007 settles back into the cockpit of the iconic Aston Martin DB5 for at least one memorable scene. No word on whether it’s fitted with an ejector seat, machine guns or both, however.

Bentley Checks in at the St. Regis