The three-panel “Eyes of the Stars”Mural, a stunning piece by Miami artist Santiago Rubino, portrays a scene of elegance and beauty. Like the place where it hangs—The St. Regis Bar & Wine Vault—the mural evokes a feeling of sophistication.Soft jazz fills the airy cocktail bar, where a custom-designed metal vault displaying some 80 bottles of high-end liquor extends to the ceiling. The vault itself is a work of art—a one-of-a-kind piece from world-renowned design studio Yabu Pushelberg, which also designed the majestic interior of The St. Regis Bal Harbour Resort.

Yabu Pushelberg’s ability to seamlessly blend Art Deco elements with clean, modern lines is evident in every area of The St. Regis Regis Bar & Wine Vault. Like the design itself, the space—along with its cocktail, wine and tapas offerings—is timeless, yet very modern.

“It is a very sophisticated environment,” says Guntram Merl, director of food and beverage for The St. Regis Bal Harbour Resort. “It is not old-fashioned and stuffy, but very fresh and airy. It’s a place that people come to for a first date, a business meeting or when they are doing something else of importance. It’s a place where people can come to meet friends they haven’t seen in a while.” 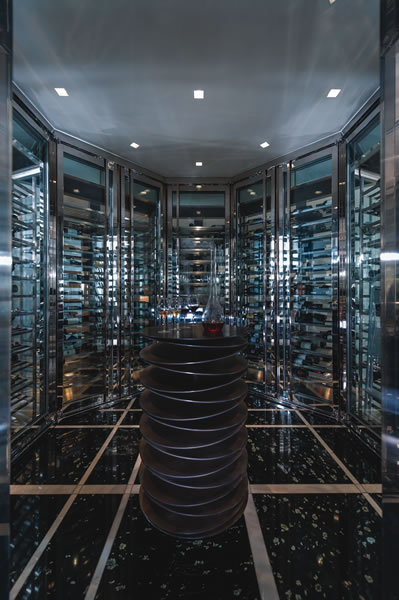 The St. Regis Bar & Wine Vault is as renowned for the gourmet bar fare as much as is for the specialty cocktails. The bar offers a tapas-style menu developed by the resort’s executive chef, Jordi Valles. A native of Barcelona, Valles has worked at restaurants around the world with Michelin-starred chefs to create trend-setting Spanish cuisine.

“He looks for natural ingredients and has a style that comes back to his Spanish heritage,” Merl says. “The food speaks for itself—the simplicity and quality of products.”

Ham, a trademark of Spanish cuisine, is one of the bar’s most distinctive food offerings. “Jamon” (the Spanish word for ham) is found in nearly every restaurant and family kitchen in Spain. With two types of world-famous cured hams in the country, Spain regards the curing process as a sacred art that goes back thousands of years, Merl says.

At The St. Regis Bar & Wine Vault, the tradition continues with three artisanal ham offerings on the menu.

Jabugo iberico ham is from the small village of Jabugo, which enjoys a unique microclimate of hot summers and snow-free winters, combined with dry days and humid nights. No other place in the world has such perfect conditions for producing a top-quality ham with unrivalled texture, aroma and taste, Merl says.

“This is the type of jamon Iberico most often served in Spain,” Merl explains. “It is made from the native “cerdo Iberico” black pigs that are fed a diet of high-quality grain and some acorns. It also was the first Iberico ham to earn entry into the United States.”

The St. Regis Bar & Wine Vault’s third ham offering, serrano ham, is cured for more than a year in the mountains of the country. A favorite in Spain, it has a complex flavor and mild saltiness that makes it a St. Regis favorite for tapas.

“The hams are a must-try,” Merl says. “Spain is the world’s only producer of jamon Iberico because it is made with an ancient breed of pig found only on the Iberian Peninsula. They are believed to descend from the prehistoric Mediterranean boar. The flavor is complex, with a note of sweetness. They are delicious.”

Other tapas standouts include the seafood and sherry croquetas with romesco sauce; lobster salad salpicon with avocado puree, Arbequina olive oil and tangerine gelatin; and “pulpo a la gallega”—Galician octopus with smoked paprika.

The St. Regis Bal Harbour Resort dresses up more traditional bar fare with a one-of-a-kind twist. The beef sliders have caramelized onions and manchego (a sheep’s milk cheese from the La Mancha region of Spain), while the tuna mini burgers are topped with ginger aioli and arugula. 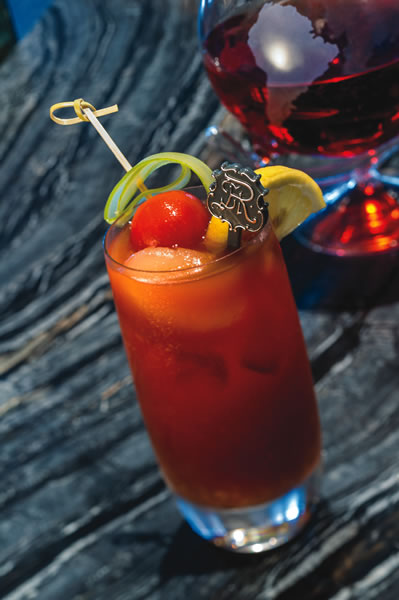 Not to be outdone, the cocktail menu at The St. Regis Bar & Wine Vault is equally distinctive.

“We’re very well known and reputable for our mixologists who create some of our drinks,” Merl says. “We do a classic-inspired version of many popular cocktails.”

“The name came because we’re on the East Coast looking at the sunrise every morning,” Merl says. “The key lime gives it a nice acidity. It’s more fragrant and sweeter than the traditional drink. We use ice cubes made with key lime as well. As you take a sip, it cuts the richness of the tomato and gives it a little bit of a cleaner acidity. It’s more fresh tasting.”

Of course, those who prefer to try the original red snapper also can find it on the bar menu. Made with Grey Goose vodka and bloody mary mix, it still has that one-of-a-kind taste that only the St. Regis can offer.

Another great cocktail on the menu is the Hemingway Daiquiri, also known as Papa Doble in honor of Ernest Hemingway.

“It has much to do with our local lore,” says Sebastien Verrier, sommelier at The St. Regis Bal Harbour Resort. “The story contends that ‘Papa’ was at La Floridita in Havana when he discovered the daiquiri. He worked with the bartender to get it just the way he liked it. We haven’t strayed from the original, using 4-Year-Old Flor de Cana, a silver rum that has a subtle coconut flavor perfect for our tropical locale.”

One other great drink to try, especially for those who really like cucumbers: the Cucumber Aficionado, with freshly pressed cucumber juice, Effen cucumber vodka, coriander syrup, lime juice and a garnish with a ribbon of fresh cucumber and a spritz of dill pickle brine. 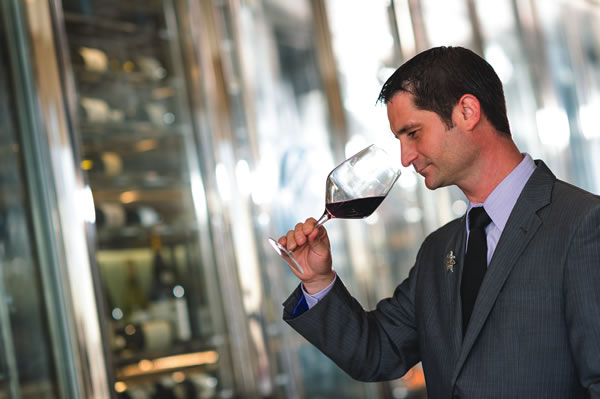 Holding between 2,500 to 2,800 wines with 400 different references, the Wine Vault’s selection hails from around the world. The Wine Vault is individually temperature-controlled, which means that different varietals are chilled at different temperatures. Some of the higher-end cognacs also are held there.

There are also a variety of wines available by the glass and Verrier changes the wine list at least once a month. “We are always looking for great values, allocated boutique wines and older great vintages,” he says. “Late this year, we are adding a few more high-end wines by the glass such as those from Ornellaia, Insignia and Cheval des Andes.”

Merl adds that the by-the-glass offerings are meant to provide a selection for all guests. 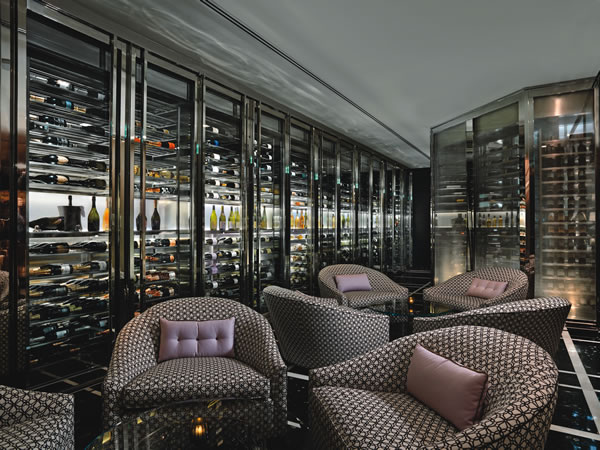 “Our guests drink different wines with food than they do with tapas or on their own,” he says. “We choose our wines by the glass with that underlying thought so they’re not drinking a heavy food wine when they’re at the Wine Vault to only have a glass of wine.” 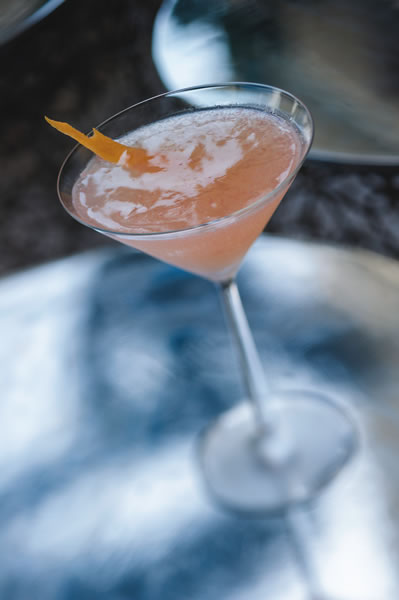 The Wine Vault also hosts events, including themed wine tastings. One favorite guest tasting calls out the characteristics and flavors in six different wines, encouraging guests to identify those flavors by sampling them after tasting the wine. However, the tastings change weekly, with a variety of different events for guests to enjoy.

“One week it might be wines from Burgundy, and another week it is Old World versus New World,” Merl says. “Because we have a very strong sommelier team, it’s a great experience for our guests.”

“The theme is ‘Taste like a Sommelier,’ ” he says. “We blind-taste the guests with three whites and three reds and go over the description of each of the wines—color, nose, taste—and come to a conclusion about why this would be a particular wine and not a different one.”

The St. Regis Bar & Wine Vault is home to another very unique experience—the traditional Champagne sabering, when St. Regis butlers use a sword to saber the neck off the bottle of Champagne every evening at 7:30 p.m.

“Two of our butlers come down, and we invite everyone to join us,” Merl says. “We do it to make the evening special and to celebrate the end of a great day.”

The sabering is punctuated with live Latin jazz played at the bar each night. Several nights of the week the bar hosts guitar artists; other nights, it features Latin jazz trios.

With plenty of tapas, live Latin jazz, cocktails and wine, The St. Regis Bar & Wine Vault has all the offerings to celebrate a great night.