The thrill of a good find after perusing crate after crate of vinyl is a feeling that no one should miss. Flipping through albums—so many of which you may not have known existed until that moment—then slipping a disk out of its sleeve, setting the needle into its grooves and experiencing the unparalleled warmth of tone and detail of sound, is a revelation after being accustomed to the compressed MP3 files that rule the digital music world. Even the crackling of a slightly worn record is a welcome addition to the music, bringing reflections of who the previous owner might have been and what the life of the album was before landing in your hands.

Although vinyl was the chosen music delivery system of years past, the art of record-searching continues to be a favorite pastime of music-lovers. And sales are not just relegated to music from a bygone era. Modern artists are leaving their mark on the record scene as well. In 2015, vinyl album revenue was $416 million, the highest seen since 1988, according to the Recording Industry Association of America (RIAA). More interesting still, RIAA points out that for the second year running, revenue from vinyl sales topped that of on-demand stream services like YouTube, free Spotify and others, which are ad-supported. Much of the current success can be associated with community record stores, which bring attention to the exciting world of vinyl.

“I think every city that has a great record store is enriched by it, it’s a whole culture that gets created,” says Michael Kurtz, co-founder of Record Store Day. The annual event is celebrated by record store staff, customers and artists from around the world who value the importance of independent music retailers. Each April, record stores host artists who perform in-store, sign autographs and show their support of the local music community. This year, Record Store Day was celebrated in more than 3,000 stores internationally, but the Bay Area is an especially important locale. “Record Store Day wouldn’t exist if it wasn’t for San Francisco, because when we first launched the idea, we took it out to different folks and [record store] Rasputin’s management team was the first one to respond.” Artists including Metallica, Mumford & Sons, Bonnie Raitt and Kacey Musgraves performed at record stores in 2016, and 2017 is sure to bring in more big names as it will be the 10th anniversary of Record Store Day.

In San Francisco, the evolution of music, from blues to pop, rock, punk, heavy metal and much more, can be found in the stacks of albums that make their homes in record shops around the city. Neighborhoods like Haight-Ashbury, Lower Haight and the Mission District boast their own music havens where knowledgeable staff—and even more likely, shop owners—will take the time to help you find that must-have new album or introduce you to the classic record you never knew you needed, but now can’t go home without. 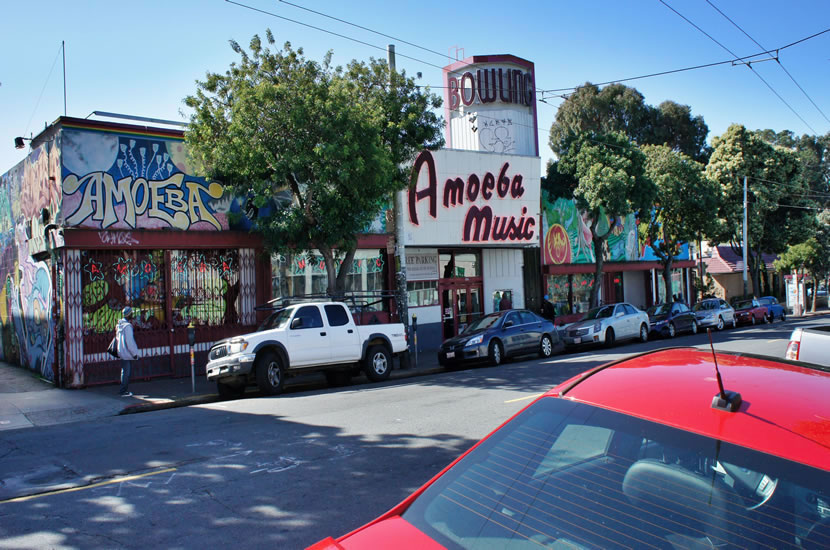 Best known for its hippie hangouts of the 1960s, music history permeates Haight-Ashbury with bands like Jefferson Airplane and Big Brother and the Holding Company with Janis Joplin having been heavily influenced by the scene of the time. While walking through the district, relics of the past can be spotted—the house that played host to the Grateful Dead’s music and antics is one historical landmark to visit. Today, the neighborhood continues to draw masses to its creative havens, including record shops, which add more flavor to the iconic area.

For a one-stop-shop that is sure to have even the most obscure selections, Amoeba Music sits just across from the eastern side of Golden Gate Park on Haight Street. Described as being the world’s largest independent record store, Amoeba carries hundreds of thousands of music and movie titles from a wide range of genres. Beyond having crates full of records, the store, a converted bowling alley, hosts intimate performances and signings with all types of artists. The rows of music are a spectacle to behold, and whether in search of something specific or the best new band you’ve never heard of, it’s likely you’ll be leaving with a some new tunes in hand.

Just down the road from Amoeba Music is Recycled Records. While smaller than Amoeba, Recycled definitely packs its space with vinyl. Find an assortment of genres here including classic rock, blues, jazz and much more. While picking up a few albums, you’ll be able to search through a selection of other collectables and memorabilia that might be the perfect complement to that new music. Owner Bruce Lyall curates the shop’s selection and a bit of everything, from rock posters to rare travel books, can be found there.

One of the Bay Area’s longest open record shops is Rasputin Music & Movies, which has sold a diverse selection of music at its several California locations since 1971. Rasputin’s vinyl selection often holds hidden treasures and rare finds for those willing to do some digging. With three shops within just a short distance of one another, Haight-Ashbury is the spot for an all-day music-searching adventure.

Haight-Ashbury may be the center of peace and love in San Francisco, but the neighborhood of Lower Haight, just down the road, offers a bit more of a laid-back feel. Less touristy than its Ashbury counterpart, this area of Haight offers quiet streets that boast an equally artistic scene. Lower Haight is nonchalant in its coolness and visitors to the area can stop in at urban eateries, eclectic art galleries and, of course, record stores galore.

A bit of style and a whole lot of soul makes Rooky Ricardo’s Records a must-visit spot for a day of vinyl shopping. Thirty years ago owner Dick Vivian bought 35,000 45s from a distributor whose business had gone under. With no record store experience he began selling the items in Lower Haight and eventually added LPs to the mix. What started as a small shop, known better by overseas collectors than listeners down the street, eventually became a San Francisco institution. The cozy store is set up with listening stations and hours can be spent sampling songs from Vivian’s huge selection of 45s and LPs. While different genres can be found on the racks, much of the available catalog features soul music.

There’s something almost mythical about Jack’s Record Cellar in Lower Haight. The corner building with a rusted sign noting solely, “Records” is a hidden gem, even unknown by many locals. Its elusive quality might have to do with its hours of operation, which are basically whenever the owners choose to come in. Fans of the shop have created an unofficial Facebook page on which they post when the shop is open, so that other record shoppers can come mine for vinyl gold. An array of genres are available from vintage country to Bay Area hip-hop and electronic dance music (EDM).

Selling solely EDM records is the basement shop of Vinyl Dreams. The name is appropriate: Walk down a few steps into the small retailer and enter a DJ’s heaven. A bit different than other record shops of the city, Vinyl Dreams sells genres including house acid, house, deep house, tech house and techno. 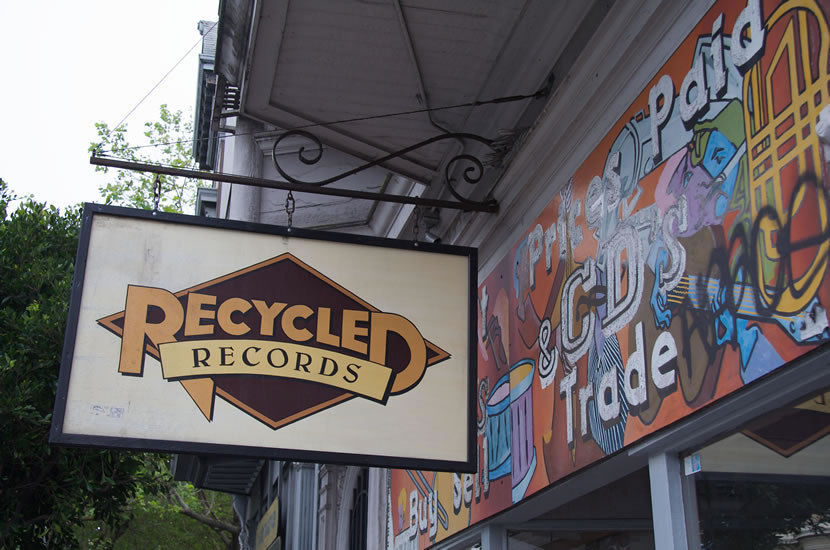 Known as the Mission, this is where modern musicians find their refuge. The area is a melting pot of cultures, cuisines and distinct styles. Often the juxtaposition of an older Latin market next door to an upscale, trending restaurant will be seen on the busy streets. Live music, from mariachi tunes to jazz or indie rock, can be heard billowing out of open bar doors. Among these diverse establishments are the record shops which hold down the exciting music scene.

It’s easy to spot Grooves record shop when walking or driving around San Francisco—located on busy Market Street, the store’s windows are covered in multicolored vinyls and its sign is a well-known sight with spiral graphics that draw guests in like Alice falling into the rabbit hole. Once in the shop, it’s easy to be consumed by music while perusing the wealth of records from myriad genres.

The newly opened Stranded Records store on Valencia Street is the retail arm of archival label Superior Viaduct. The shop, which replaced the long-standing and locally popular Aquarius Records, opened in August with a fresh coat of paint and new custom furniture, but much of the same talented team that helped shoppers at Aquarius remains. Shop an array of new and used titles, many of which are reviewed and posed on the Stranded website (strandedrecords.com).

No matter what genre of albums you are looking for, after a day of record hunting in San Francisco, your collection is sure to grow—and that’s music to any vinyl fan’s ears.