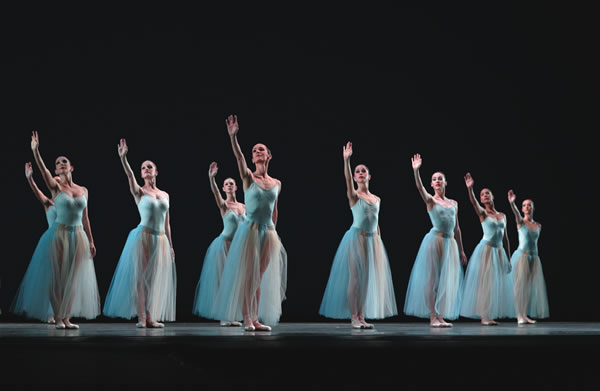 It’s Lourdes Lopez’s debut season as artistic director for the Miami City Ballet, but you’d never be able to tell she hasn’t done this before.

She’s embarking on an ambitious endeavor, introducing four new works this season. That’s no small feat for a company like the Miami City Ballet. A former star dancer of the New York City Ballet and protegee of that company’s co-founder, George Balanchine, Lopez is up to the task.

In addition to presenting iconic pieces by Balanchine and Jerome Robbins, the season breaks new ground in premiering works by contemporary choreographers Christopher Wheeldon and Nacho Duato, a departure from tradition in a company that previously had a relatively standard repertoire.

“My view is always to bring in works that will both challenge dancers to help them grow as artists, and challenge audiences so they feel changed and transported,” Lopez explains. “It’s a journey. Each of these four works speaks to the community.”

The piece’s complex choreography and dynamic rhythms make for intricate opening and closing ensembles. “We have to really count it to know what we’re doing,” principal dancer Renato Penteado explains. “It’s hard in terms of finding that musicality.”

The middle section of the piece comprises a series of quieter, more emotive episodes, with dramatic lighting playing a central role. According to Lopez, the power of Wheeldon’s choreography is how he links angular movements and geometric patterns together architecturally, creating structure from atonal, sometimes chaotic, music that might otherwise seem un-danceable.

“It’s a challenge for dancers. They have to live in it,” she says, pointing out that while the music is abstract, audiences will still connect with it. “It’s not scratching or pounding. It’s created like math. It’s very much like [the music of Igor] Stravinsky—you develop a taste for it. You find its lyricism.”

The second work the company will introduce is “Jardí Tancat,” a lyrical piece by Duato premiering Jan. 10-12. With music by Maria del Mar Bonet, dancers perform barefoot to traditional Catalan folk songs, telling the story of a strong-spirited people who pray for rain that never comes.

Lopez believes Miami’s Latino audiences will relate to the soulful songs and meaning of this earthy piece. “It’s movement unlike anything these dancers have ever done,” Lopez says. “And yet, it’s organic to the classically trained dancer.”

A third program (Feb. 14-16) introduces two new works to the company, including the highly anticipated “West Side Story Suite,” a ballet adaptation of the eponymous 1957 Bernstein and Sondheim musical choreographed by Robbins. Of course, introducing a musical piece to a ballet company isn’t always straightforward.

“I first had to figure out if I had any dancers that could sing,” Lopez says. After auditioning 20 hopefuls, she sent tapes of six possibilities to the trust that licenses Robbins’ works. “We had to prove to them we could do it.”

Lopez believes the story of gang conflict, based on the tale of Romeo and Juliet, is as relevant as ever. “It’s the story of two cultures trying to understand and live with each other. It’s a very global message,” she says.

The company also will premiere Balanchine’s “Episodes” during the season’s third program. This modernist work set to orchestral music by Anton Webern takes the audience through five increasingly lyrical sections, culminating in a final scene bursting with music evocative of an Italian Mass.

While eager to add new works to the company’s repertoire, Lopez also enjoys reviving its classics, many of which are Balanchine works. It’s a natural fit for Lopez, who was named executive director of the George Balanchine Foundation in 2002.

“Everyone—including the corps de ballet—has a very important role,” the principal dancer says. “In fact, the corps may be more important than the principals, since the patterns Balanchine created for them are so iconic.”
Rounding out the first program is Balanchine’s “Ballo della Regina,” set to music cut from the original production of Giuseppe Verdi’s “Don Carlos.” The piece is difficult for the lead ballerina, involving fast, powerful pointe work and turns. Lopez welcomes former New York City Ballet star Merrill Ashley, for whom Balanchine created the piece, to stage the performance.

“She is the direct line from him and everything he told her about it, as well as her experience in having performed it,” Lopez says.

Other Balanchine works this season include “Concerto Barocco,” with two soloists dancing the parts of violins in Johann Sebastian Bach’s “Double Violin Concerto in D Minor” (Program 2), and “Tchaikovsky Pas de Deux,” a piece set to the “lost music” from act three of “Swan Lake” (Program 3).

In addition to four premieres and several Balanchine classics, the upcoming season includes “Symphonic Dances,” a piece choreographed for the Miami City Ballet by Alexei Ratmansky. The piece is set to Sergei Rachmaninoff’s moving and turbulent “Symphonic Dances of 1941.”

The final program of the season (April 11-13) is the full-length ballet “Don Quixote,” set to Ludwig Minkus’ famous score and choreographed by Russian choreographers Marius Petipa and Alexander Gorsky.

For Lopez, making this vision a reality was easier said than done. “I started with the idea of introducing one new piece in each program,” she says. Grouping the rest of each program’s works was like trying to solve a Rubik’s Cube, requiring a complex calculus of music, mood, costuming, colors and lighting.

“The audience needs to feel like it’s been through a dinner, from the appetizer to the main course and even the dessert,” Lopez says.

To maintain the integrity of the original choreography, the company learns new pieces from “repetiteurs,” dancers hand-picked by choreographers (or their trusts, if they are deceased) to teach the steps and their interpretation.

Dancers have classes and six hours of rehearsal daily, with only Mondays off during the season. Despite the demanding schedule, the dancers love what they do. “When I get tired, I try to remind myself: This is it. This is what I’ve worked for. It helps push me through,” Albertson adds.

Lopez relies heavily on experienced professionals like Penteado and Albertson, both of whom have been with the company for more than a decade. After memorizing the exacting details of the steps and sequences, Albertson’s mind is free to give life to the role. “I rely on the music to tell me what to feel and project to the audience,” she says. “I try not to think about it too much, because no matter what, I want to look natural.”
Penteado echoes this sentiment, describing how once muscle memory develops, “that role is engraved on you as a person.” His approach to those roles is something Lopez values highly, calling him the backbone of the company.

While some companies experience high turnover rates, it’s a testament to the Miami City Ballet’s culture of cooperation that so many principals stay with the company long-term. “It’s like a family,” Lopez says. “You can’t change families every year, and going from company to company doesn’t allow artists to explore and experiment in a safe environment. It’s the daily one-on-one process that truly creates a company.”

Ballet is a living art, passed from person to person, so maintaining a connection with classics is the only way to keep their legacy alive. But with many companies struggling to fill seats, Lopez admits ballet must explore new frontiers to stay relevant.

“There’s a real need to look at your organization artistically and ask if you’re producing what the audience wants to see,” Lopez says. “I’m not saying the classics have to disappear, but you have to let today’s emerging artists create the way they see fit.”

She doesn’t shy away from testing new waters, whether that means uncovering talented singers in her company or having them dance barefoot to Spanish folk songs. As always, Lopez finds inspiration in Balanchine, a man who was nothing if not an innovator. B

From Dancer to Director

Born in Havana in 1958, Lourdes Lopez grew up in Miami before moving to New York at 14 to study ballet full time. At 16, she joined the New York City Ballet, where she was promoted to soloist in 1981 and principal dancer in 1984.

“I grew up in the generation of heirs to those who really changed the art form,” she says, referring to the years she spent performing numerous leading roles under the direction of legends George Balanchine and Jerome Robbins.

Since her time with the New York City Ballet, Lopez has held a number of positions, from arts reporter for WNBC-TV in New York to dance faculty at Barnard College. In 2007, Lopez co-founded Morphoses dance company with “Polyphonia” choreographer Christopher Wheeldon, now an artistic associate at London’s Royal Ballet.

“Lourdes really wants to take the company to the next level,” dancer Tricia Albertson says of her leader. “We had the same formula for a long time, but she’s expanding our repertoire. … She has a sense of integrity and really good taste.”