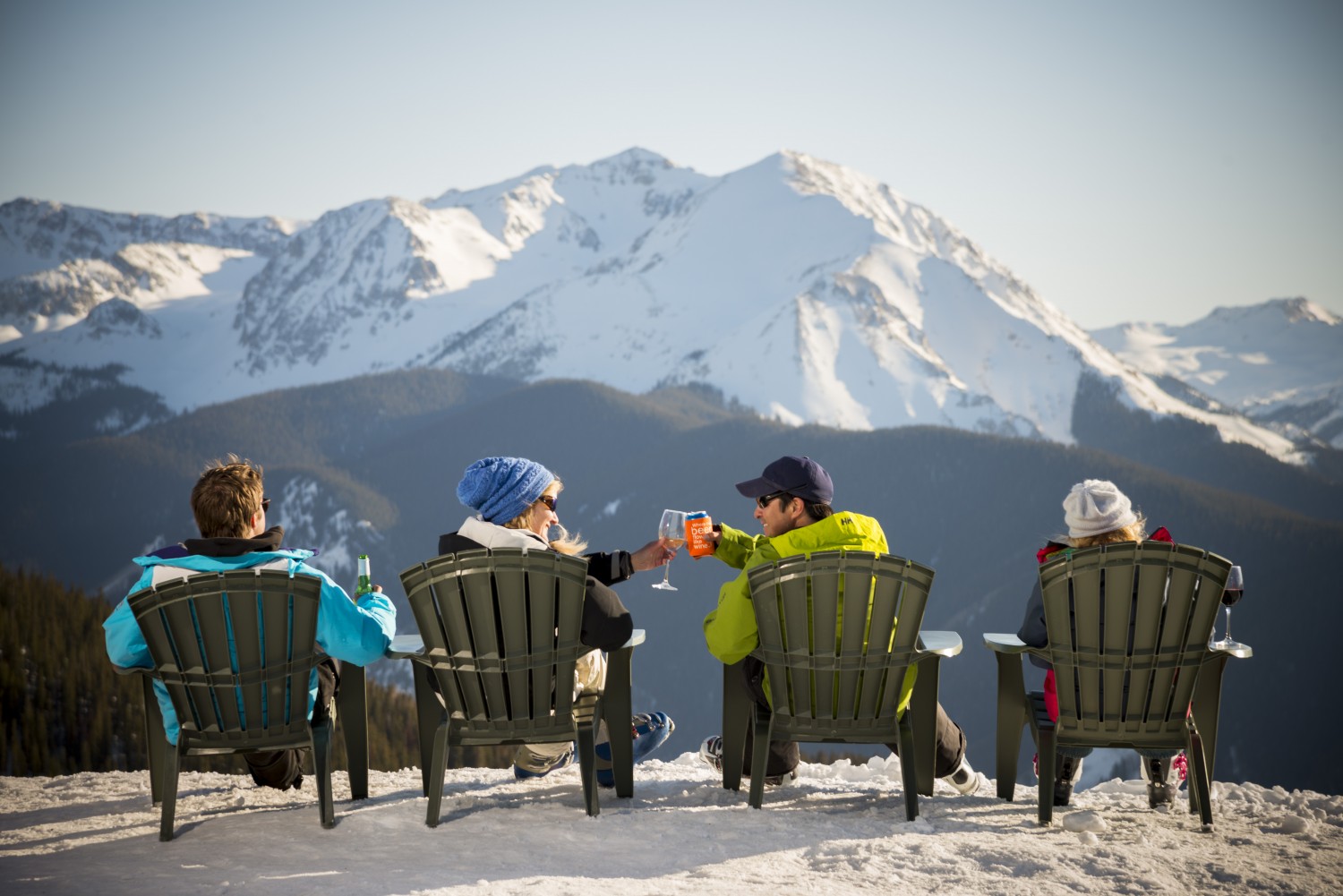 As the thermometer dips, snow seekers find themselves dreaming of white-topped peaks and deep powder. Even after an ultimate day on the slopes, the wintertime fun doesn’t have to end. Following the final run, snow sport enthusiasts strap off their gear and head into town to enjoy the apres-ski scene.

“We always joke that skiing is just an excuse to have a beer,” says John Stifter, editor of Powder magazine. “Apres is one of the best parts of skiing, whether you’re with friends or alone. It’s inherent to authentic ski culture, where you swap stories, share laughs and revel in the day’s experience. A real ski trip isn’t complete without quality apres.”

Keeping that in mind, here are five favorite ski towns with ultimate apres opportunities, from bars and restaurants to spas and other activities for post-piste pampering.

With four unparalleled mountains—Aspen, Snowmass, Buttermilk and Highlands—the Aspen snow riding options are endless and the after-hours scene is just as impressive. Start at Ajax Tavern at the base of Aspen Mountain for “apres hour” that runs from 3-6 p.m. Sample the eatery’s famous truffle fries and a spirit from the large drink menu. More substantial fare is also available, including entrees ranging from oysters to pan-roasted Pacific halibut and grilled flat iron steak. Indoor and outdoor seating is available year-round along with live music.

Those who finish on the slopes before nightfall—and visitors who never strap on skis—may want to take a ride up the Silver Queen Gondola to the top of Aspen Mountain for the scenic panorama. The art galleries scattered around town offer a different perspective and allow visitors to take home a piece of mountain beauty captured in a painting or photo. Artistry of the culinary variety can be appreciated at element 47—which pays tribute to silver, the metal that first made Aspen famous—in the Forbes Five-Star Little Nell hotel. A diverse menu embraces seasonally inspired and local ingredients in dishes from lamb to rabbit, steak and salmon.

The local crowd can be found at Aspen Brewing Co., where craft beers abound—try This Season’s Blonde, an English-style pale ale, or the European-inspired Brown Bearale. After you’ve had your fill of beer, the party continues at Escobar, a below-ground nightclub that resembles an airplane interior with its mirror and steel decor, upscale cocktails and contemporary music.

Known for its backcountry cache, endless groomed trails and countless stars that have graced its slopes over the past 40 years, Sun Valley is an idyllic place to get out on the town. The region is essentially composed of three small burgs—Hailey, Ketchum and Sun Valley—and each boasts village pride. Happy hour is easy: After the day’s last run, the River Run Day Lodge at the base of Bald Mountain (on the River Run side) is a quick pit stop before moving on to the main apres scene. The Day Lodge, which has an eclectic menu that includes sushi and wood-fired pizza along with live music, sits on the Big Wood River—a natural setting just as stunning in its frozen state.

To be immersed in an Austrian-style experience, visit Sun Valley’s Konditorei, which serves fresh-baked pastries, coffee and cocoa (with equal parts steamed milk and melted dark chocolate) in a chalet-style dining room with a roaring fireplace. After warming up, head over to Sun Valley Center for the Arts for some indoor entertainment in the way of plays, concerts and more. Or, stroll the art galleries in Sun Valley and Ketchum during monthly Gallery Walks, which often include new exhibit openings, wine receptions and artist meet-and-greets.

Just over an hour and a half from Denver, Vail is a center for snow sports, hosting both the Burton U.S. Open Snowboarding Championships and the Alpine World Ski Championships this season. Aside from its more than 5,200 acres of skiing terrain, Vail is apres central.

Start at one of Vail’s newest apres attractions, The 10th. The restaurant is a ski-in, ski-out destination named for the famous 10th Mountain backcountry hut system, a series of ski cabins once used by the Army’s 10th Mountain Division to train for World War II.

When you’re ready to move downtown, head to the newly renovated Vendetta’s for pizza, like the Snow Pig covered in pepperoni, sausage and Canadian bacon. Members of the Vail ski patrol will no doubt be sitting at the end of the bar. Higher-end dining is also available in town, with main courses like slow-braised beef short ribs at Kelly Liken. From there, walk 10 minutes down the road to the Shakedown Bar, where locals and tourists alike dance and mingle.

Another way to work off those calories: Trade skis for skates at the Solaris outdoor skating rink in Vail Village, open from 2-9 p.m. If gliding across the ice sounds too strenuous after a long day on the slopes, Vail Mountain Lodge offers a complete spa with massages to soothe sore muscles using organic, plant-based products.

Dinner can be found at Latin Soul at Lakeside Inn and Casino, where endless amounts of Brazilian barbecue carved tableside tempts the palate on Friday through Sunday nights. To warm up with a few cocktails, Fire & Ice Grill & Bar features three big outdoor fire pits in the heart of Heavenly Village near the gondola that takes skiers 2.4 miles up the mountain from town. On the way, the gondola stops for riders to take in stunning lake views from an observation deck at 9,123 feet. Also in Heavenly Village, an outdoor ice rink offers the opportunity to enjoy some more winter fun with skating from 10 a.m. to 8 p.m.

A short distance up the road, visitors can dance the night away at Peek Nightclub inside Harrah’s hotel and casino, which boasts 40 VIP sections, big-name DJs from Las Vegas, Miami, New York and Los Angeles, and the ability to present full-scale music performances. Cabo Wabo Cantina is another top nightlife spot; take the party to this Harveys Lake Tahoe casino for more live music and dancing.

Northeast skiing is steeped in tradition and Stowe is at the heart of this rootsy ethos. A small community, Stowe Mountain Resort sits at the foot of Spruce Peak and Mount Mansfield—and the apres scene here isn’t about quantity but quality.

Named after a historic backcountry trail, Hourglass Lounge at Stowe Mountain Lodge is the place to begin a post-glisse adventure. Order some Hourglass ale (made special for the lodge by Vermont’s Rock Art Brewery) while sitting in front of the bar’s cozy fire and sample appetizers from the farm-to-table menu. Listen to the piano while taking in views of Mount Mansfield, which, at 4,393 feet, is the highest peak in the state.

Upscale dining isn’t far away: Solstice (also in Stowe Mountain Lodge) features a seasonal menu and has partnered with local farmers and cheese makers to create meal options that are distinct to the region. Wash down a hearty dinner at The Bench in Stowe Village, with a selection of some 28 craft beers on tap.

European apres-ski tradition is in full swing at Swiss Fondue by Heinz, where guests venture to dip away in pots of melted cheese and chocolate. Around seven minutes up the road, a romantic evening can continue with a sleigh ride pulled by Percheron and Belgian draft horses. Evening rides starting at 4 p.m. are offered by Gentle Giants, across from Topnotch Resort on Highway 108. Guests are tucked into a candy apple red sleigh filled with warm blankets to traverse a covered bridge before winding along a trail through the woods.