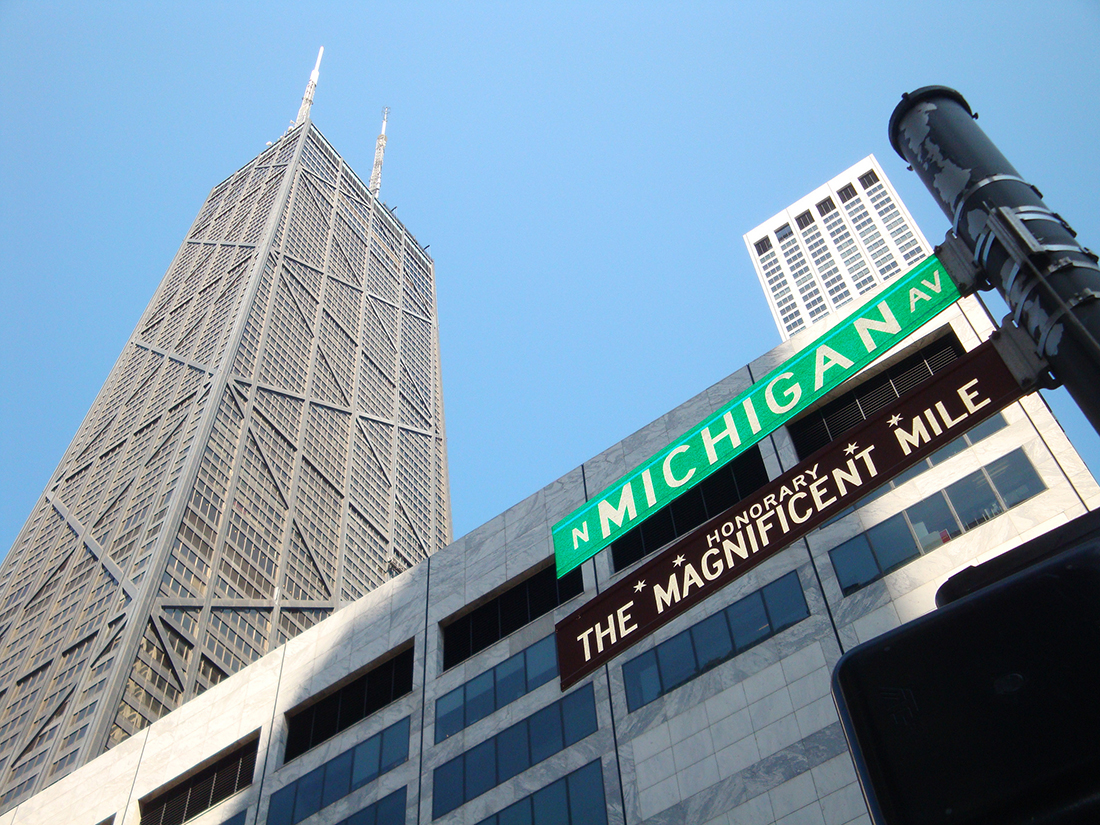 Extending a square mile from North Michigan Avenue, the Magnificent Mile is an immersive environment, anchored by 450 stores, 275 restaurants and 60 hotels, plus more attractions for visitors to explore. The district, which begins at Oak Street in the north and spans to the Chicago River in the south, is mostly known by its reputation as a shopper’s paradise. Strolling the neighborhood, malls like The Shops at North Bridge, 900 North Michigan Shops and Water Tower Place offer multiple levels of designer boutiques for every type of shopper. On the street level, store windows displaying the latest fashions keep the area looking vibrant and fresh season after season.

In recent years, the 13-block stretch has welcomed a few transformations. “One thing that is changing with the Mag Mile is that it’s very modernized and [is] becoming more like Times Square, given the Verizon store and how modern it is, plus the Burberry and [Salvatore] Ferragamo stores,” explains Bobby Gonzalez, concierge at Hotel Palomar Chicago. “It started happening in the past two years. There’s also a new hotel going up next to the Wrigley Building. It’s called the LondonHouse and will be coming in 2016. It’s surprising for the Mag Mile since right now there’s a lot of older ones like InterContinental and the Westin.”

Such newness mingles with a historic vibe everywhere on the stretch of road thanks to still-standing and iconic marvels like the Water Tower, Wrigley Building and Tribune Tower, all of which have had a place on the avenue for about a century. This mix showcases the distinct style Chicago exudes to visitors: a city that honors its past but is unafraid to embrace its future.

Here are 9 things to see and do on the Magnificent Mile:

1. “There is so much that women can do, but men have options, too. There’s a detailed barber called MERCHANT & RHOADES, where a man can get anything from a haircut to a straight razor shave. I [also] like MEZLAN because a lot of times we get businessmen shopping for shoes, and they want something that’s high quality. You won’t find these shoes at the smaller stores.” (Merchant & Rhoades: 900 N. Michigan Ave., Level 6; 312-337-2525; merchantandrhoades.com) (Mezlan: 900 N. Michigan Ave., Level 3; 312-962-8871; mezlanchicago.com) —Amiri Hayden, chef concierge at Omni Chicago Hotel

2. “There are five theaters in Chicago that have been voted one of best theaters in the country, and LOOKINGGLASS THEATRE is one of those.” (821 N. Michigan Ave.; 312-337-0665; lookingglasstheatre.org) —Sheila Garg, chef concierge at Hotel Monaco Chicago

3. “The historic WATER TOWER is one of the few buildings that survived the Great Chicago Fire. Now, there are art exhibits in there—they usually rotate fairly regularly and there’s always something cool to see. And a nice little park surrounds the tower, too.” (806 N. Michigan Ave.; cityofchicago.org) —Kathy McClanathan, chef concierge at InterContinental Chicago

4. “The Magnificent Mile is Chicago’s main artery for many reasons. Not just for shopping, restaurants are vying for the few spots remaining that sit just off of the strip. It’s not new, but that’s certainly part of the appeal. RL RESTAURANT is a unique find, housing some of the city’s finest in classic American cuisine (right next door to the brand’s store). Embellishing on style cues from the Ralph Lauren clothing company, this is also its origin. Nowhere will you find a more serious Vesper martini, and it’s certainly one of the last that offers a fantastic steak Diane.” (115 E. Chicago Ave.; 312-475-1100; rlrestaurant.com) —Judson Corrie, concierge at Waldorf Astoria Chicago

5. “The new BURBERRY flagship store—the building itself is such a cool piece of architecture because
they made it look like the brand’s signature plaid.” (633 N. Michigan Ave.; 312-787-2500; us.burberry.com)
—Kristen Klus, chef concierge at Four Seasons Hotel Chicago

6. “Definitely GARRETT POPCORN—it’s a Chicago staple. It’s been around for 65 years. I actually grew up going there as a kid when we would come downtown. There was only one shop at that time so we would get out and wait in line and my dad would circle the block while we waited. [Garrett Popcorn is] known for the cheese and caramel mix, so it’s the perfect blend of salty and sweet. They moved from the original location, but it’s still on Michigan Avenue. It’s a destination when you visit Chicago because it’s such an iconic confection.” (625 N. Michigan Ave.; 312-944-2630; garrettpopcorn.com) —Kristen Klus, chef concierge at Four Seasons Hotel Chicago

7. “BANDERA, a South American restaurant, [has] live jazz music nightly.” Those in search of a classic cocktail will appreciate the offerings here, which include everything from a Pimm’s Cup to a Manhattan. (535 N. Michigan Ave.; 312-644-3524; hillstone.com) —Front desk staff at Hotel Allegro Chicago

9. “I would recommend visitors check out TRIBUNE TOWER. It’s an architectural landmark in the city and if you walk around the building, there are pieces of different landmarks, such as the Great Wall of China and Berlin Wall. It’s a really cool bit of history in the middle of downtown. Dylan’s Candy Bar is right next to it if you need to get your sugar fix in the middle of the day.” (435 N. Michigan Ave.; 312-222-9100; tribpub.com)
—Gianna Bamonti, assistant chef concierge at The Peninsula Chicago